Pectoral Sandpiper at the Lauwersmeer 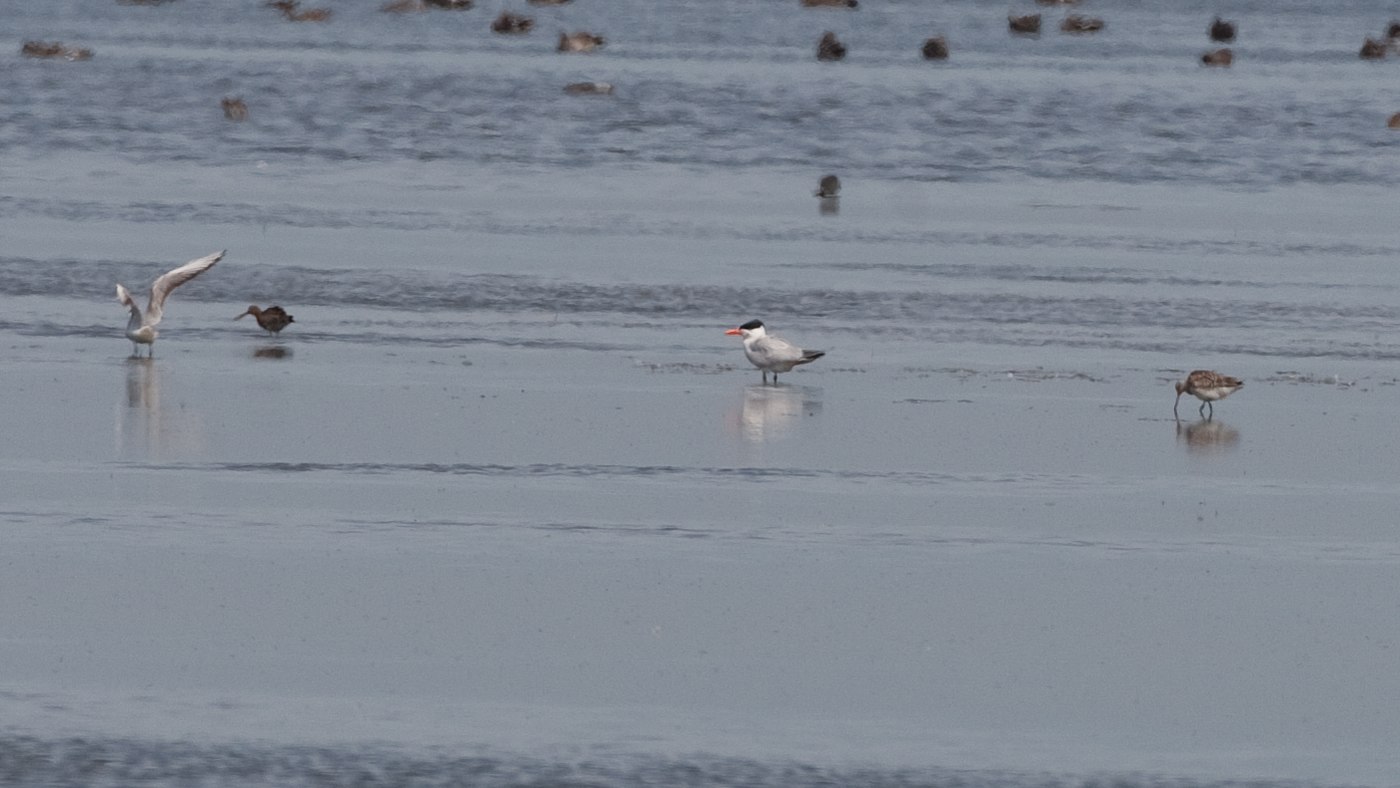 To accomplish the 300 species this year I have yet to add a number of species to the list. In the past week a Pectoral Sandpiper and a Long-billed Dowitcher were reported in the Lauwersmeer. Enough reasons to do another round to the north of Holland.

Early in the morning at 5 am I get up to pick up Jan Verhoeven in Uden and together we drive towards Diependal to start the day. After a quick ride we arrive with beautiful weather in the parking lot of Diependal. During the walk to the watch hut we hear a mating Goldcrest, a species we did not have here in the previous weeks. At the entrance of the hut you first have to go through a corridor of 160 meters. Then you have a spiral staircase and you are in the hut. Here you have a good view over the area. Almost immediately we see 3 Red-necked Grebes and we hear a Savi's Warbler. The harsh sound of a Water Rail is heard, and this we did not have here also in previous weeks. A male Ruddy Duck swam in the company of two Tufted Ducksin front of the hut. We stayed here for about half an hour. In the car the daylist was updated and Diependal accounted for 60 species, not wrong.

We set sail towards Blijham for the Montagu’s Harriers. I wanted a time in the morning because of the light conditions for photos. Upon arrival in the area the air was pale and gray. The temperature was only 11 degrees and we saw only 3 Montagu’s Harriers. Any compensation was a Quail calling. We stayed not long and decided to drive towards the Lauwersmeer. As we came closer to the Lauwersmeer the weather got better. On arrival we had a blue sky and it was pleasantly warm. We started with a walk in the Zomerhuisbos. The Golden Orioles sang plenty and we saw several Spotted Flycatchers. We walked out of the woods and came out in the reed fields. 2 Grasshopper Warblers were singing in full and also some Bluethroats were seen. A couple of Bearded Tits were flying up and down among the reeds. We stayed here half an hour in the hope that we would see a White-tailed Eagle. Unfortunately we did not see the Eagle. On the way back an Oriental Turtle Dove was added to the list.

Next stop was at the watch hut at the Jaap Deensgat. It was a short stop because there was not much to see. At the Vlinderbalg we discovered a Ruddy Shelduck. A Lesser Whitethroat was heard on the way to the coastal road. Here we wanted to inspect the flats, unfortunately it was low tide so there was not much to see. We were hungry so it was time for a shrimp sandwich at the restaurant Schierzicht in the harbor. First we did the Black Redstart at the marina. After the sandwich and a cup of coffee we drove to the Ezumakeeg where we started in the north. The telescopes were prepared and the goal was to discover the Long-billed Dowitcher between the many birds present. There were many Black- and Bar-tailed Godwits which did not make the search easier. After half an hour we had not found him yet. We moved to the south. We found a nice wading bird what we determined as a Pectoral Sandpiper after some hesitation. The bird was moulting into winter plumage which is new for me. After I had seen bird in flight, I was absolutely certain that it was a Pectoral Sandpiper which is a new year species (264). We also found a couple Curlew Sandpipers and a Little Stint which was also in winter plumage. Among the many Ringed Plovers we discovered three Eurasian Golden Plovers. An adult White-tailed Eagle was seen in the distance. Unfortunately we could find the Long-billed Dowitcher. After at least an hour we went back to the north for another check. No a wrong decision because we found a Caspian Tern (265).

After another attempt in the southern part we decided to drive back home. In the car the daylist was made up, a 110 species with 2 new year species.