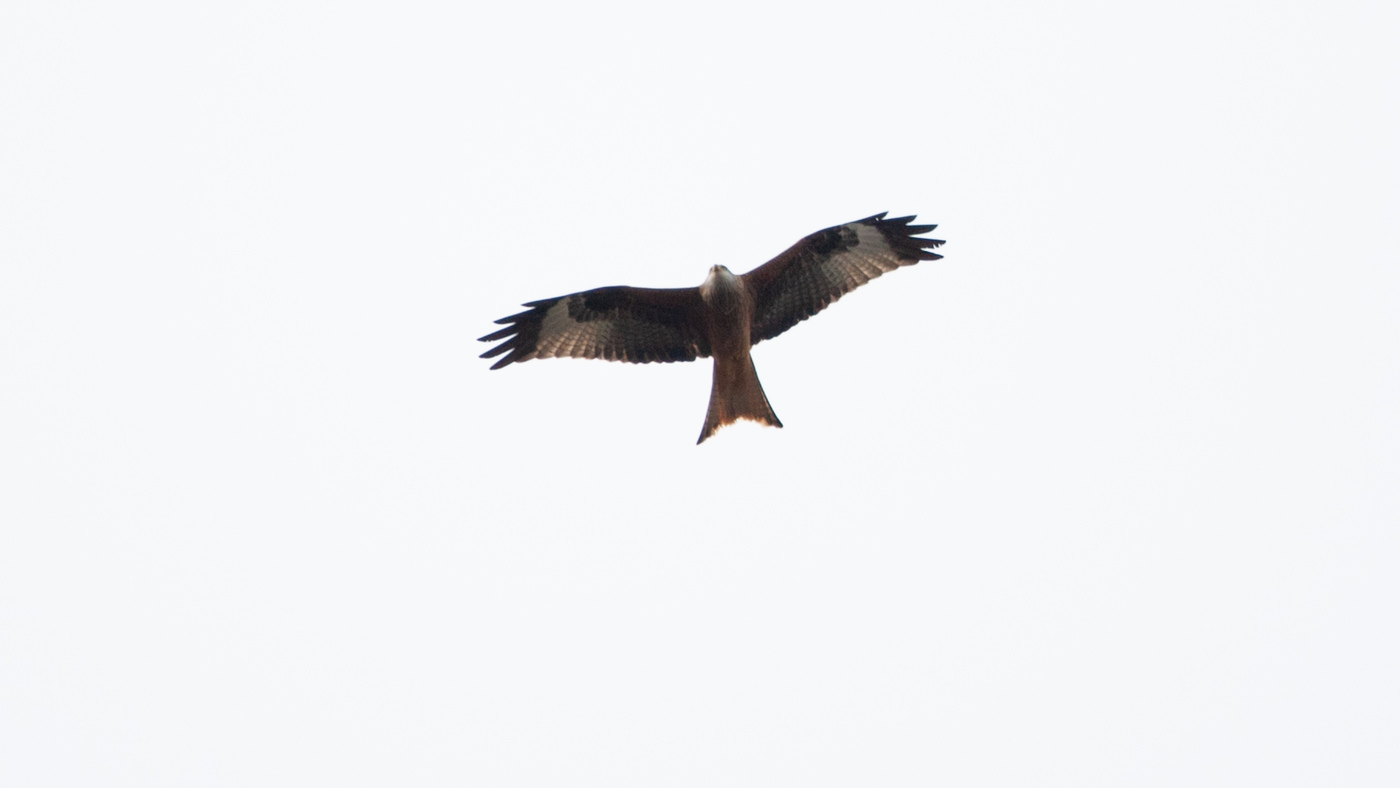 Saturday morning I arrive at 6.45 pm on the Kamperhoek. Ico is already there and he is counting with open trunk lid. This, however, offers little protection for the strong wind which is directly south. I put on my winter coat and that is certainly not a luxury. It feels cold and it's completely cloudy. In any case, it is dry and visibility is good. There are already quite a few numbers of birds migrating and especially the numbers of Wood Pigeons catch the eye.

In the first hour we see groups that is more autumn like and in this hour we count 1011 copies. We also see groups of Reed Buntings that cross the Ketelmeer. The local male Peregrine chased with great panache a young male, the female watched the spectacle from a distance. Above the IJsselmeer, 3 Storks are picked up and an hour later a group of 6 Storks are seen. A Red Kite passes right above the migration site and despite the poor light a picture is made. An hour later another Red Kite is seen. The first Little Gull of migration season is seen between a group of Black-headed Gulls and occasionally a Marsh Harrier passes the migration site.

After noon a young White-tailed Eagle is suddenly seen which likely came flying from the IJsselmeer. The bird is right in front of the migration site for a while and can be viewed with the scoop beautifully. The bird has a flawless dress thus we keep it at a second calendar year bird. Due to the distance and poor light there is no photo opportunity. The count lasts till 14:00 o’clock and most striking species is the Wood Pigeon with 1624 copies. For a complete overview of the census click here.

Sunday morning I’m present again and somewhat before seven I park the car on the embankment. While preparing the telescope I see the first groups of Reed Buntings fly over. There is a moderate southeast winds, it is cloudy but the visibility is good. The Reed Buntings migrate brisk in the first hour and 240 are counted. There also fly reasonable numbers of Starlings and other songbirds. It seems to be a completely different day than yesterday. In the second hour the Reed Buntings remain to migrate well and now there are 241 listed. Later in the morning the numbers of Lapwings start significantly to increase. The Skylarks fly in groups regularly over the migration site. Around 12:30 pm, a Red Kite is observed. An hour later, at distance 2 White-tailed Eagles are seen with the telescope, we see that it is an adult bird and a third calendar year bird. The immature bird is clearly a different bird than yesterday, the one yesterday had a flawless dress while the garment of this bird has deteriorated. The White-tailed Eagles fly away eastwards.

Around 13:00 pm I must go home and just after I drove away Mervyn called on the phone, there are 2 Red Kites flying that should be close to you. I stop and see that indeed 2 Red Kites are flying pretty close to me and the head to the migration site. It has been a great migration count weekend and spring has clearly begun, though you would not say that if you look at the weather. For a complete overview of the census click here.