Lapland Longspurs in the Kwade Hoek

Saturday with beautiful weather I had other obligations, how different was the weather on Sunday. Around 7 o'clock in the morning I put my stuff in the car and it's raining. The temperature gives exactly 0 degrees, a dangerous combination for unexpected black ice. However, I have agreed with the family Doorn and I drive very carefully to Made where we agreed at half past seven. Until Den Bosch, the temperature is around freezing but later it’s up 3 degrees. Alert but relieved I drive further and arrive a little late at Made where they are already waiting for me. 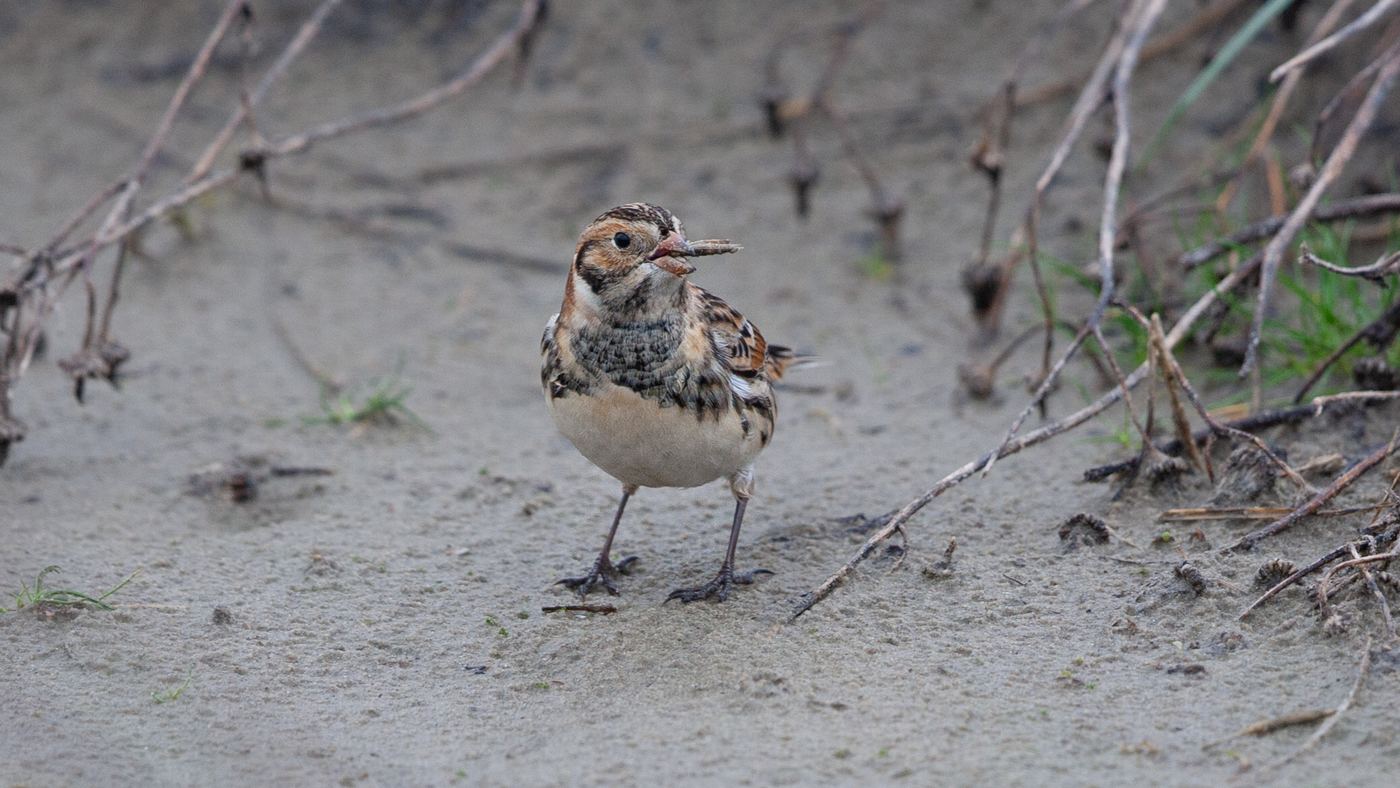 The destination for today is the Kwade Hoek where we want to make a walk in hopes of Lapland Longspurs, Snow Buntings, Horned Larks and Twites. Upon entering the province of Zeeland it stops raining and the radar shows that it will remain dry. It is already light when we drive up the parking lot at the Kwade Hoek. The shoes are exchanged for wellies and that turned out no extra luxury. The walk began with a strong wind that brought tears in my eyes. With my ears, everything was at least good and a calling Bullfinch was not missed. The powerful vocal of a Cetti's Warbler slightly later was certainly heard. From here we had the wind at your back and that helped a lot. A hunting Hen Harrier was noted and in the distance we saw a group of birders who had apparently found something.

Quietly we walked in their direction and the sound of a Lapland Longspur was heard. Not long after we saw several birds flying towards us. Luck was on our side because one of the birds landed a short distance in front of us. The bird was still partially in summer plumage and with gratitude quickly some nice photos were taken. In total we counted at least 25 Lapland Longspurs, the birds were flying around us but now kept a distance. Together with the group of birders we walked further and a group of 4 Jack Snipes flew up. Here we also  found a group of 9 Twite which were beautifully observed with the telescope. A little further was a group of about 50 Snow Buntings. Despite a gloomy windy day things went OK. When we got a little further 3 Horned Larks were discovered, they still count for my year list, we decided to walk back to the car. Along the way a few Jack Snipes, a Woodcock and a calling Water Rail were added to the list. 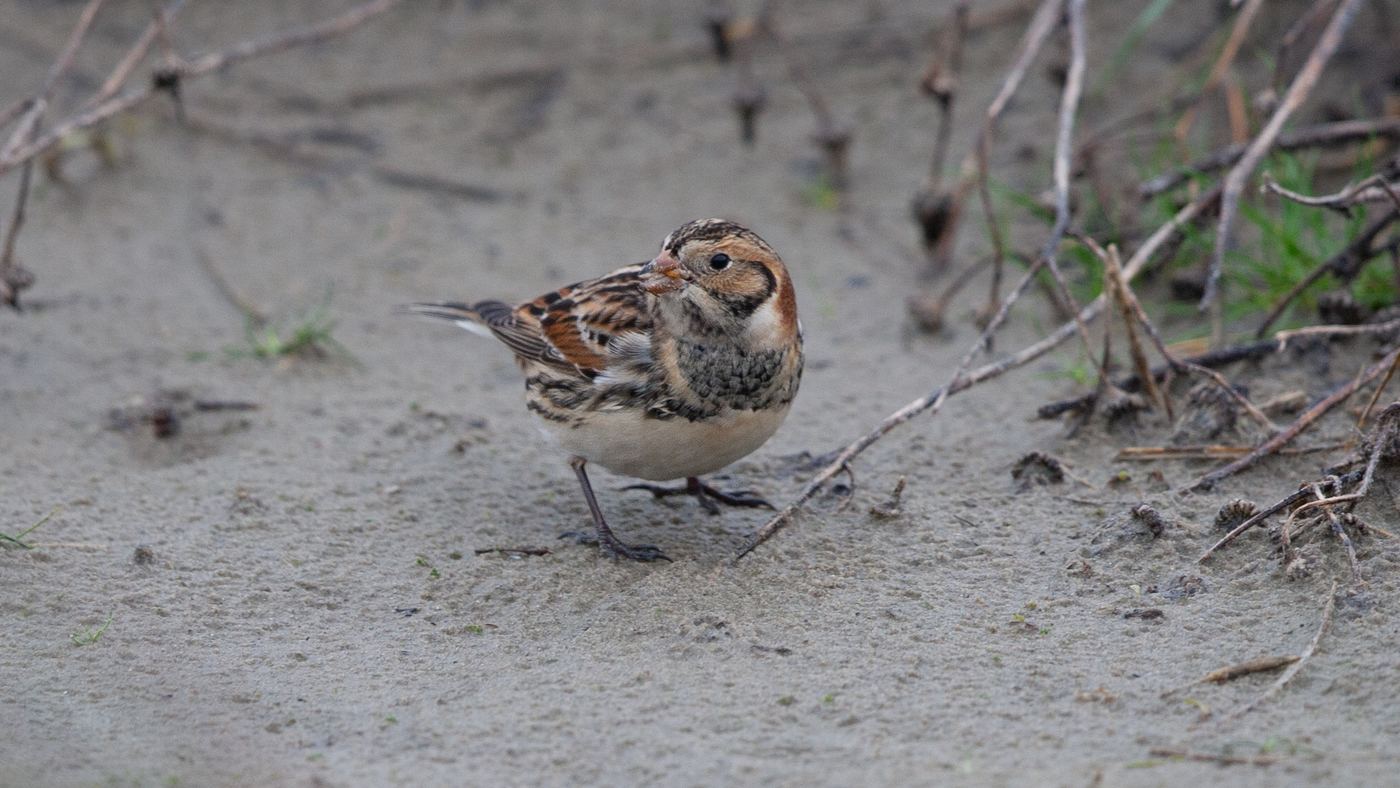 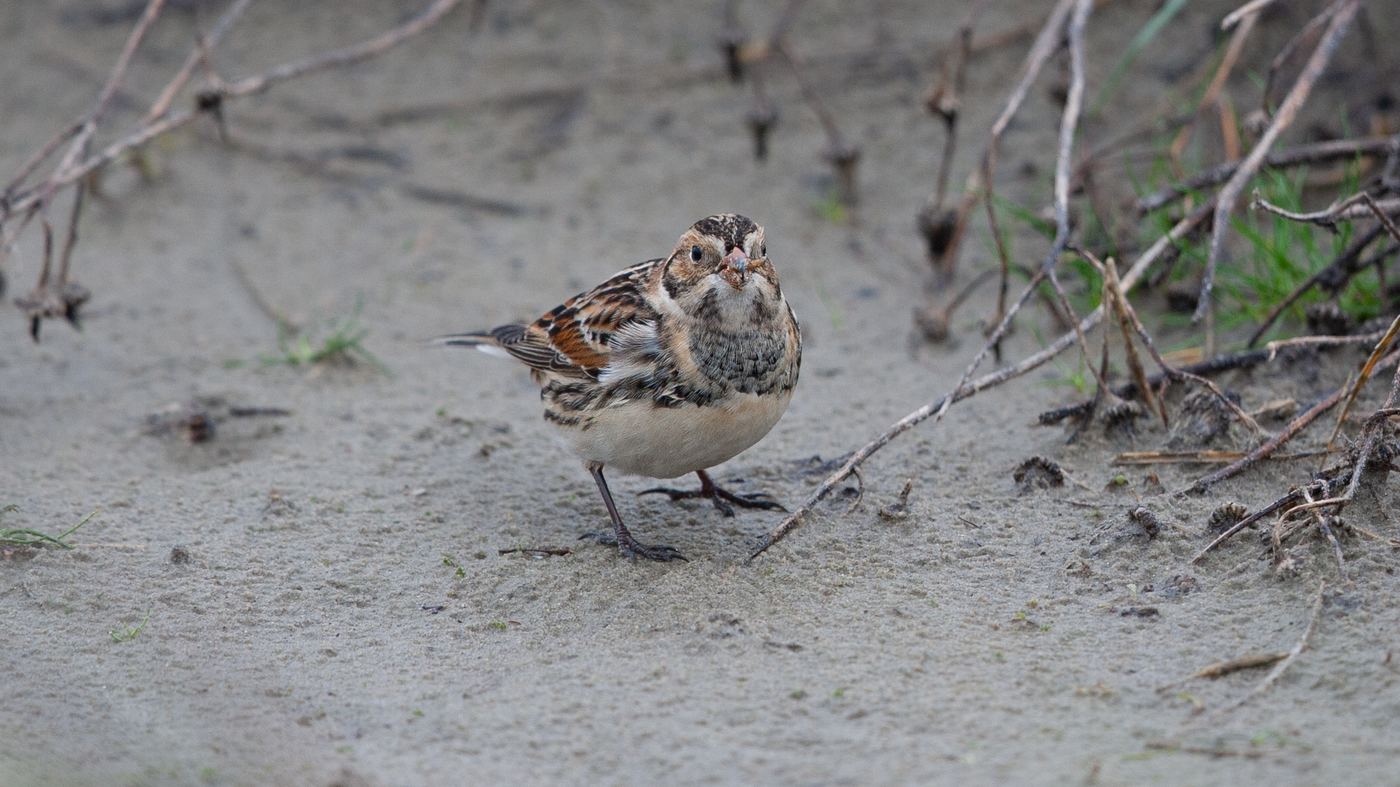 Satisfied, with a bit of a wet back, we came back to the car. It was 12 o'clock and time for coffee and sandwiches. This went down well and we drove to the Brouwersdam. It started to rain again and the dam was mostly done from the car. Outside the normal species we found not much and we drove on to the Stolpweg. The area was scoured for a Short-eared Owl or Rough-legged Buzzard but this was in vain. From the dike at the Stompetoren we saw two Porpoises fairly close. Next stop was Neeltje Jans where we found a Shag. On the sea side sat a Guillemot and an adult Lesser Black-backed Gull posed for a nice picture. It was now three o’clock and we drove to Vlissingen to see if the Mediterranean Gull, which we missed last week, was present. The bird was not in the usual place, but after some searching we could credited him anyway. 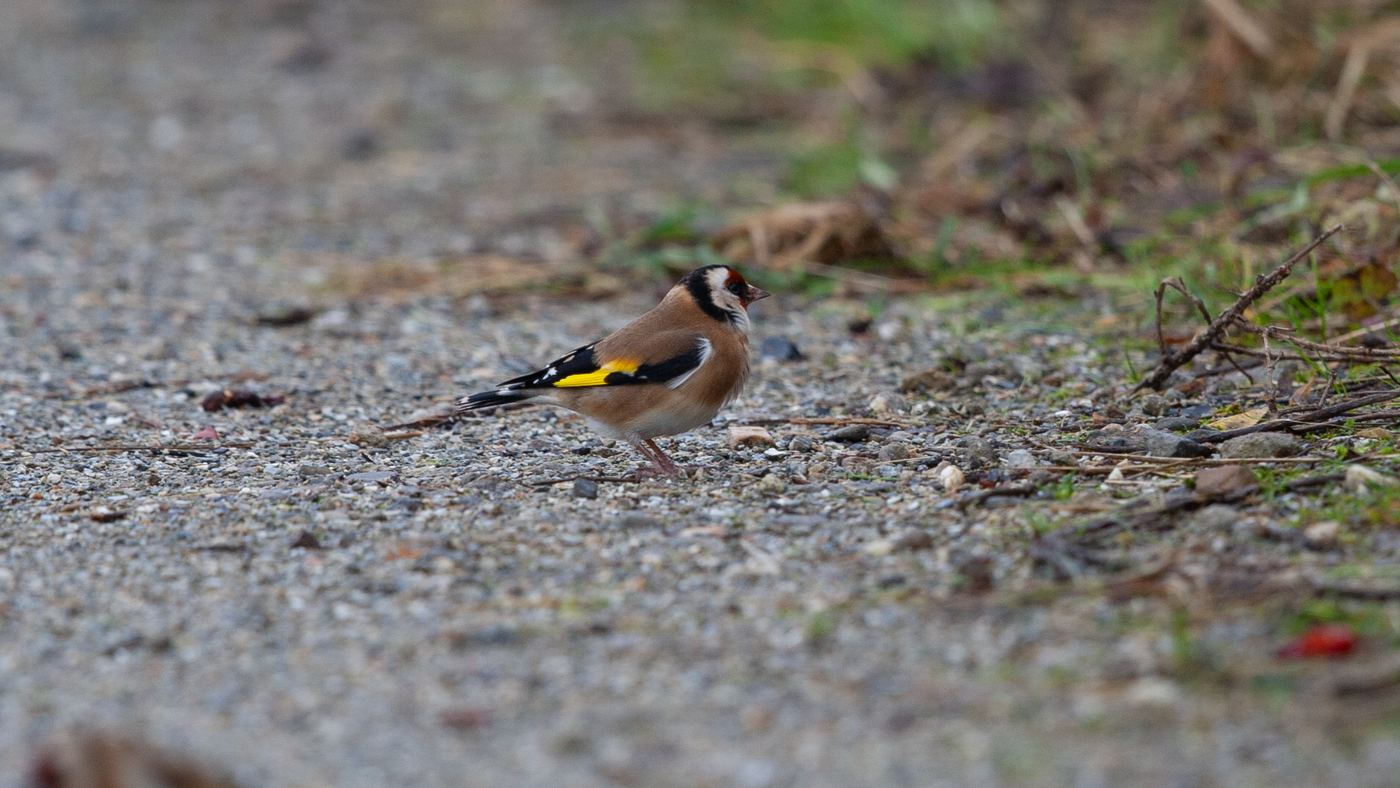 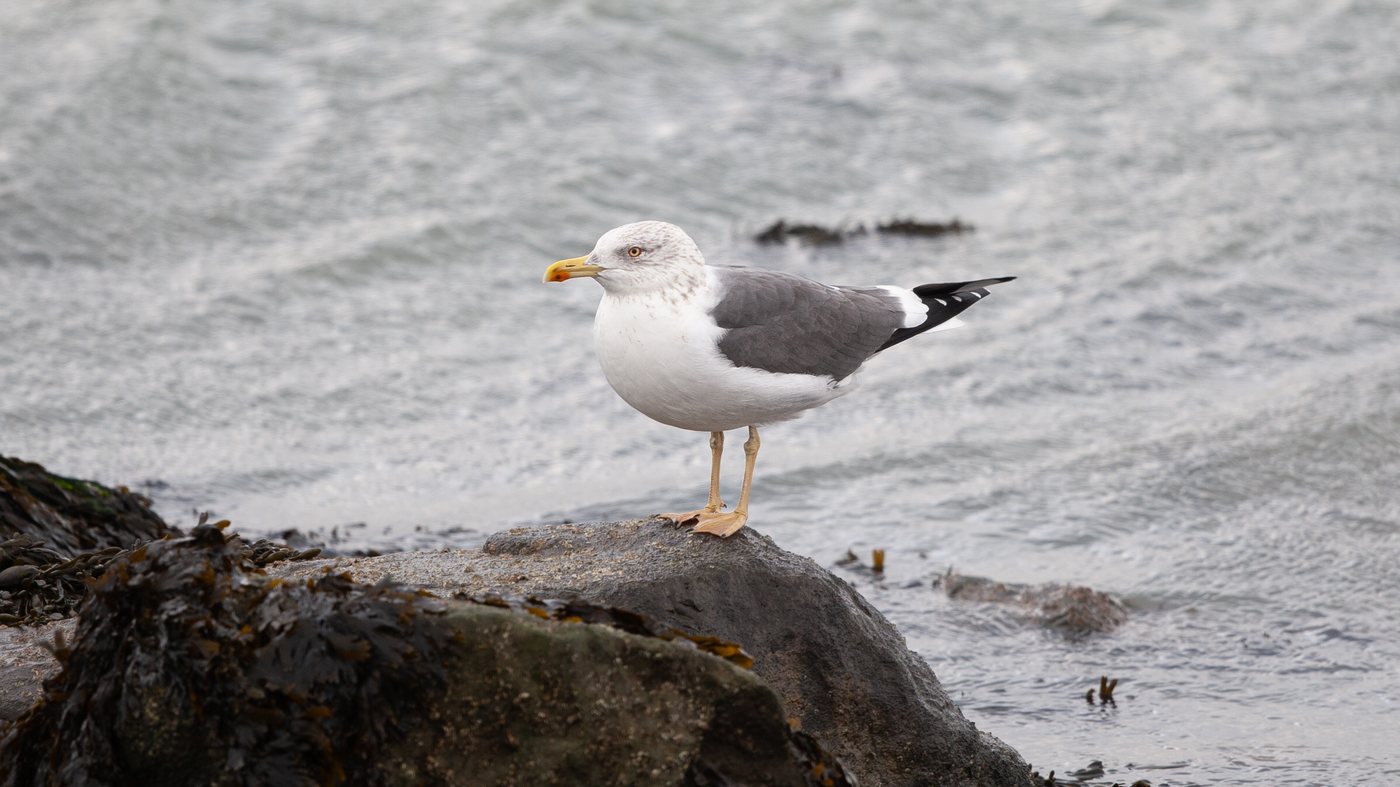 With some daylight to go, we drove to the Oesterdam. Upon arrival it appeared that the Oesterdam gas changed, there is new asphalt and the short vegetation between the stones disappeared. It did not look hopeful and we were not surprised that we did not find Twites and / or Snow Buntings. Hopefully, the vegetation comes back again in the course of time. The light began to decline significantly and therefore we drove back to Made where I said farewell to the family Doorn. With a day list of 84 species, of which 1 new for the year list and 3 new for the month list, the day ended.