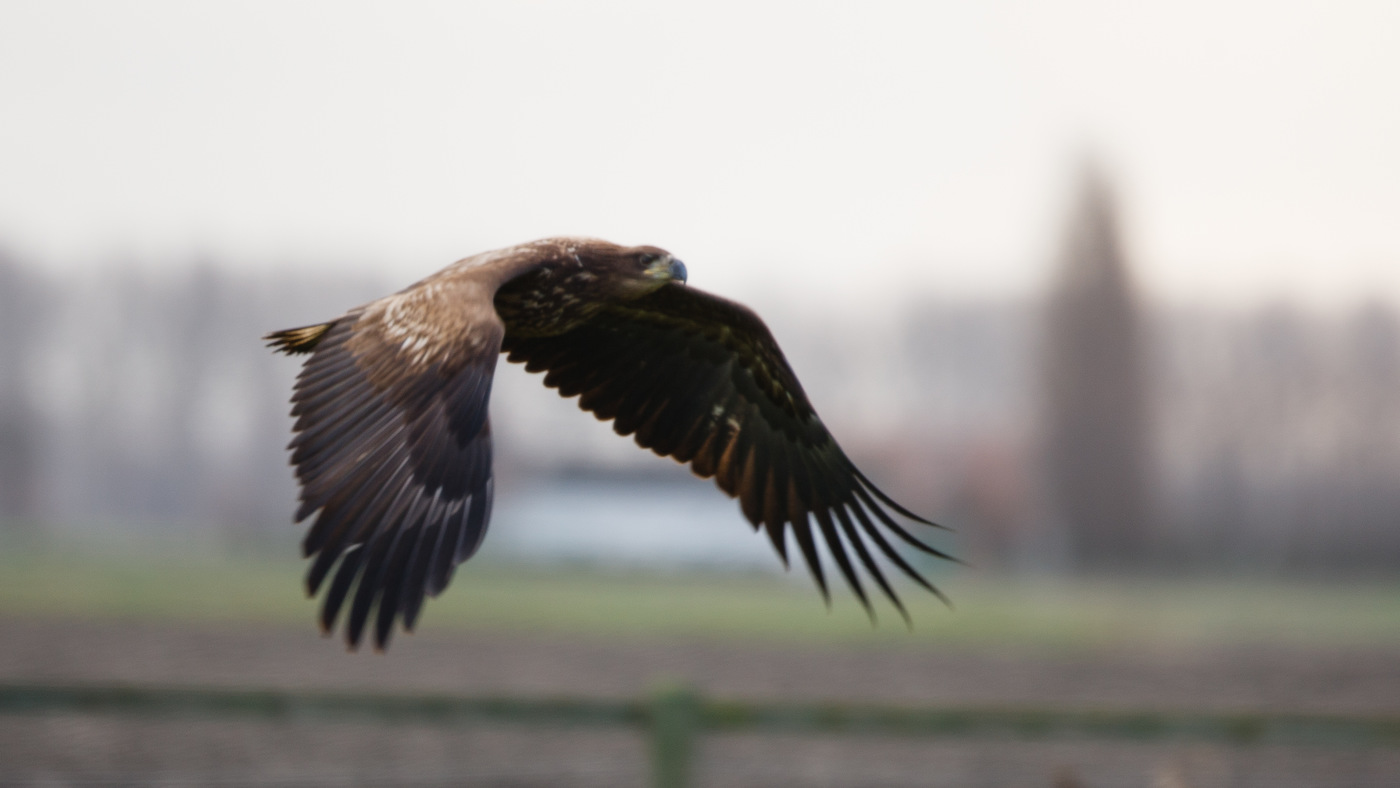 January 1 and the annual Big Day is back on the agenda. Last week was a reconnaissance lap held in the target province of Zeeland, this yielded not much and the expectations were therefor not high. A close examination on the Internet provided a new starting location: The catchment at St. Jansteen. The tour group this year consisted of: Pieter & Maartje Doorn, Alwin Borhem and myself of course. Pieter & Maartje celebrated New year's eve in Uden and stayed overnight. With Alwin was agreed that he would be present at 6:30 am in Uden.

2012 was ended festive and around 2 am we were in bed and 4 hours later the alarm went off again. Still a bit stuffy of last night we got up and there was a cup of coffee. The radar was checked and it seemed that it would be dry at the place of destination. Alwin arrived on time and in darkness we started the journey. As said, we wanted to start in St. Jansteen which is 150 km away from Uden. During the ride it was dry but beyond Antwerp it started to rain. Around 8 o'clock we were at the place of destination which was in complete darkness. It was still raining but the car windows were opened which yielded the first bird of the year: a Robin. 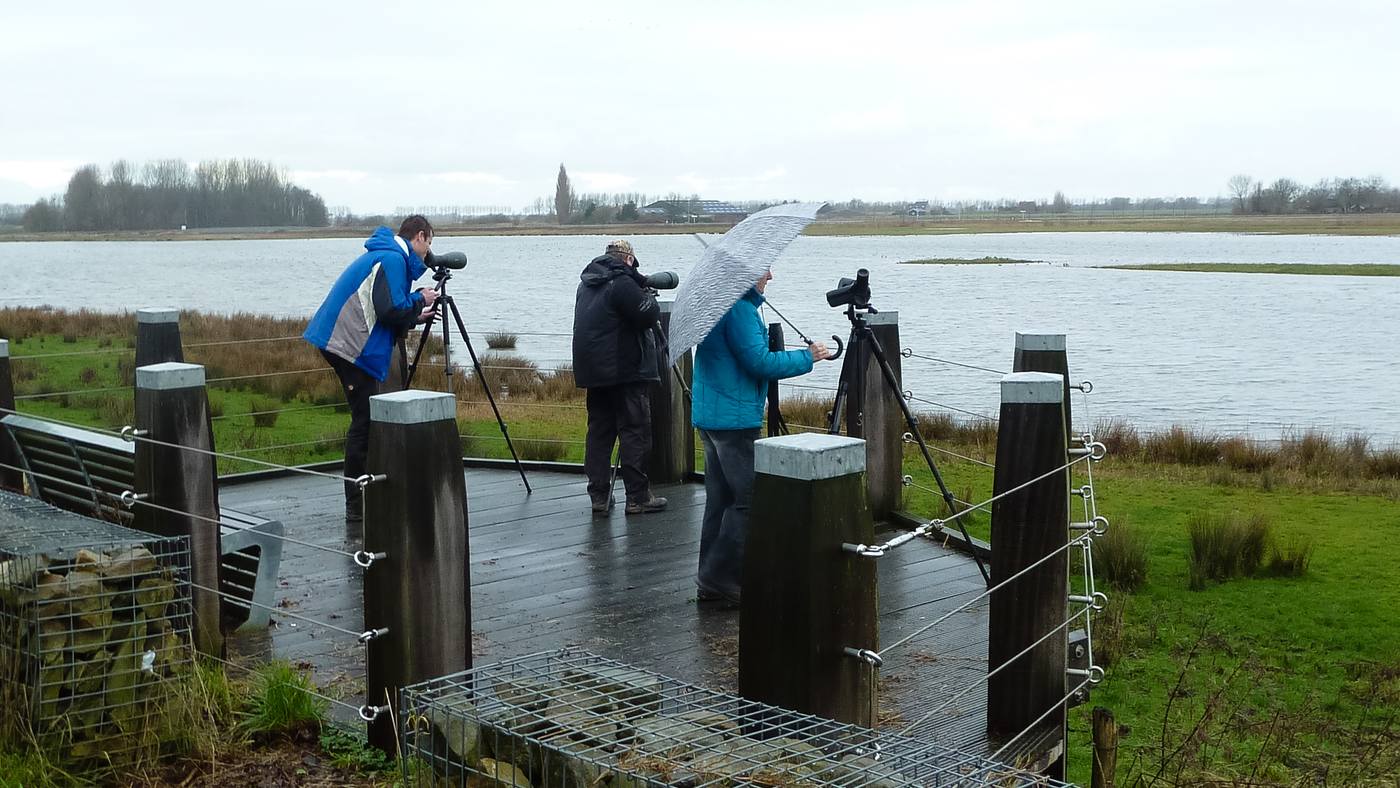 Because it was too dark, we continued to wait in the car while it was still raining. Meanwhile a Blackbird, Carrion Crow and Wood Pigeon were added to the list. It began to become brighter and despite the rain we decided to start the planned hike. A crying Wren and Jay were noted. From a pine grove sounded the cry of a Goldcrest and a calling Buzzard was heard. Somewhat further a Chaffinch was heard and we were very pleased with Brambling crying. The dusk gave way to more daylight and we could now see the surroundings better. For us lie a beautiful water extraction area which surely would promise more despite the rain. A pair of Mallards was seen and groups of flying Siskins were eagerly noted. The species were quickly coming now: Song Thrush, Dunnock, Jackdaw, Great Tit, Blue Tit, Treecreeper, Linnet, Long-tailed Tit, Redwing, Cormorant, Greylag Goose, Coot, Black-headed Gull and over flying White-fronted Geese. The rain was now in a real downpour and we walked rapidly back towards the car. Here was a Collared Dove listed and we were very happy with calling Nuthatch which we also saw a bit later. Acme before we left were 2 Haw Finches! This was definitely not bad, especially given the weather conditions, and we scored some species that we have not had on our earlier annual Big Day's. 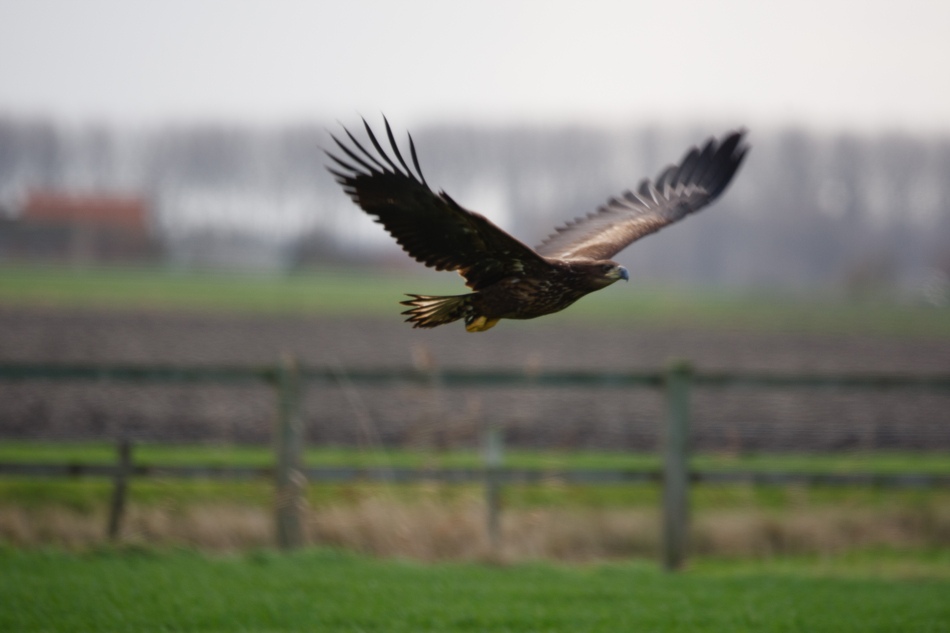 Next stop was the Sophiapolder and while driving in the pouring rain the following species were listed: Mew Gull, Bewick's Swan, Magpie, Kestrel and Gadwall. Upon arrival at the Sophiapolder it rained fortunately not so hard and we were treated to a large group of Bewick's Swans that were calling which created a special atmosphere. From the viewpoint were Shelduck, Northern Shoveler, Greater Canada Goose, Meadow Pipit, Herring Gull, Northern Pintail, Teal, Lapwing and Curlew noted. We drove on to the newer part and on the way a small cane field was inspected and yielded a Water Rail and a Reed Bunting. In the new part the Snow Goose was unexpectedly found, also here we Starling, Wigeon, Grey Heron, Mute Swan, Pochard, Tundra Bean Goose, Barnacle Goose and Tufted Duck credited. We drove on to "De Blikken"; and on the way we saw a Northern Harrier. In "De Blikken" again the telescopes were set up. This yielded a group Black-tailed Godwits and 2 Spotted Redshanks. Although there were many birds we could not find any new species and we drove to the place for the Little Owl. This was unfortunately impossible to find and we decided to drive to the Rough-legged Buzzard who for a while now sits near Cadzand. Along the way, a Moorhen was listed and fortunately it stopped raining. In the Zwin at Cadzand we found no Rough-legged Buzzard but a Sparrowhawk, Greenfinch, Goldfinch and Common Redshank were credited. On the Internet was quickly examined whether we were at the right place and we found another location that was 7 km away. A little later we were in the William Leopold Polder and here we found the Rough-legged Buzzard quickly and a White Stork was a bonus!

This had taken some time and we had to go quickly towards the Westerschelde tunnel. The time loss was more than compensated for when we saw a very large "Buzzard" in a meadow. It was hard braking and reverse gear. The bird didn't like this and when it flew up we called in choir WHITE-TAILED EAGLE! The Eagle flew towards the car and quickly some proof pictures were made. Still full of adrenaline, the journey was continued. Before we drove into the tunnel a Great Spotted Woodpecker and the Rook were noted. At 12:30 pm we were at the canal in East Souburg for the Mediterranean Gull which was not in his usual place, instead we noted a Turnstone and a Little Grebe. The channel was further searched and eventually the Mediterranean Gull was found and we also credited a House Sparrow and a Eurasian Oystercatcher. Next stop was the Zandvoortweg where we expected a Lesser White-fronted Goose, which was unfortunately, despite a thorough search, not found. Although we could list a Ruff and Great Black-backed Gull.

Next stop was at t'Vroon at Westkapelle, on the road a large group Fieldfares was seen. In t'Vroon we quickly found a Yellow-legged Gull and a Lesser Black-backed Gull. A Caspian Gull could not be found and so did the a Partridge. However, a group of Golden Plovers was discovered. A ride along the promenade yielded nothing, and also at sea we saw beside a Great Crested Grebe and a group of Black Brent's nothing. It was now 14:00 pm and time was running out. Next stop, the Middelplaten at the Veerse Lake and before that we inspected the Piet Creek in vain for a Woodcock. At 15.00 pm the telescopes were set up at the Middelplaten and quickly new species were listed: Little Egret, Red Knot, Bar-tailed Godwit, Dunlin, Common Goldeneye, Grey Plover, Avocet, Ringed Plover and Red-breasted Merganser (90). We drove to the Veerse dam and on the road the still missing Peregrine (91) was happy credited. At 15.30 pm we arrived at the Veerse Dam where the telescopes were prepared. Quickly a Black-necked Grebe (92) and a Horned Grebe (93) were found, the Horned Grebe we did not have here previously. Suddenly Alwin said: I have a Diver! Instructions for the direction followed and soon I was watching at a beautiful juvenile Great Northern Diver (94) at some distance. Hey, left of the Great Northern Diver is another Diver, Alwin called. At about 30 meters from the Great Northern Diver swam a beautiful Black-throated Diver (95)! This was again a real windfall and never before I saw a Northern- and Black-throated Diver so close together! 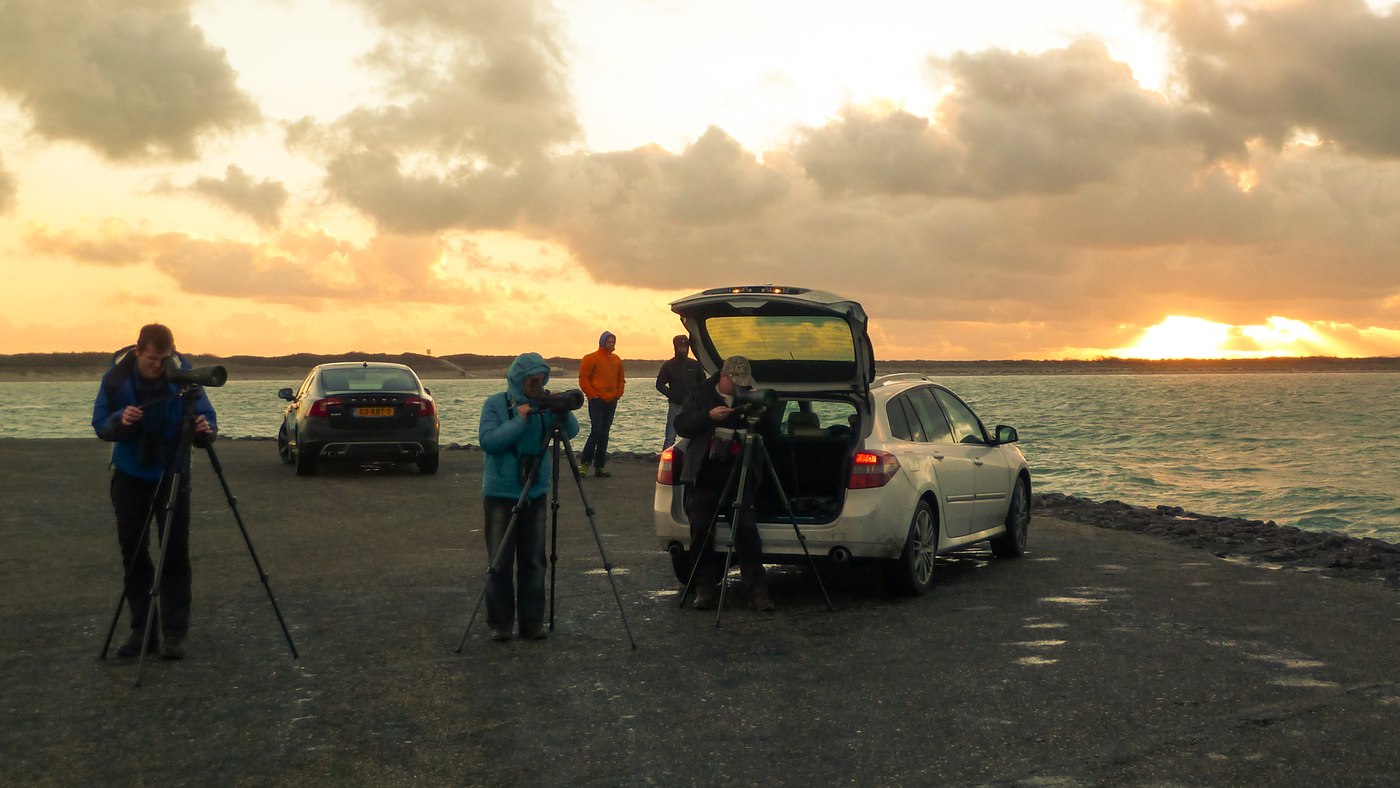 Twilight at the Brouwersdam

We had to hurry and rapidly continued to Neeltje Jans where at 15.53 pm an European Shag (96) was credited. The sun was already quite low and we decided to drive directly to the Brouwersdam. Before driving onto the dam the Grevelingemeer was inspected from the dike and it was rewarded with 2 Sandwich Terns (97). At 16.25 pm the telescopes were set up for the last time. There was a lot of wind and the waves were high which made the search not easier. However, we found the following species: Red-throated Diver (98) Common Eider (99) and Common Scoter (100). On the embankment was a group of Sanderlings (101) seen. Just before we drove away we saw at a very short distance a Guillemot (102) which was eagerly added to the list. The Long-tailed Ducks we could not found and also the Purple Sandpiper were not found. There was still light and we drove quickly to the Prunjepolder where at 16.57 pm 2 Smews (103) were found. We drove to the northern part where at 17.08 pm the last species of day was recorded: a Spoonbill (104). There was an attempt made for the Short-eared Owls behind Zierikzee but despite a thorough search they were not found. 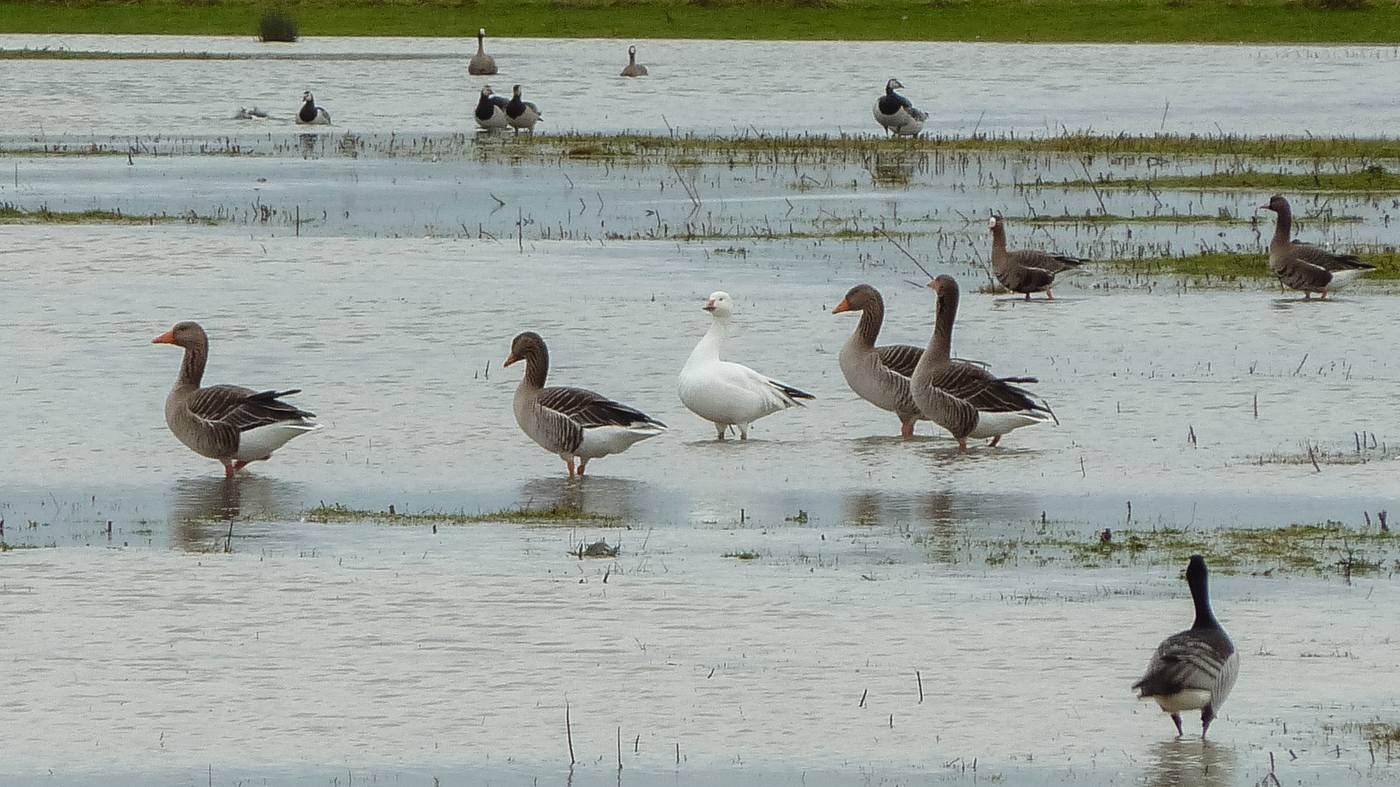 104 species is not wrong but we had the feeling that surely it could have been better. We missed a number of easy species and time was our greatest enemy. Nevertheless, it was a beautiful day with surprising sightings. It is the third best score and equaling 2010. Next year we go for it again!