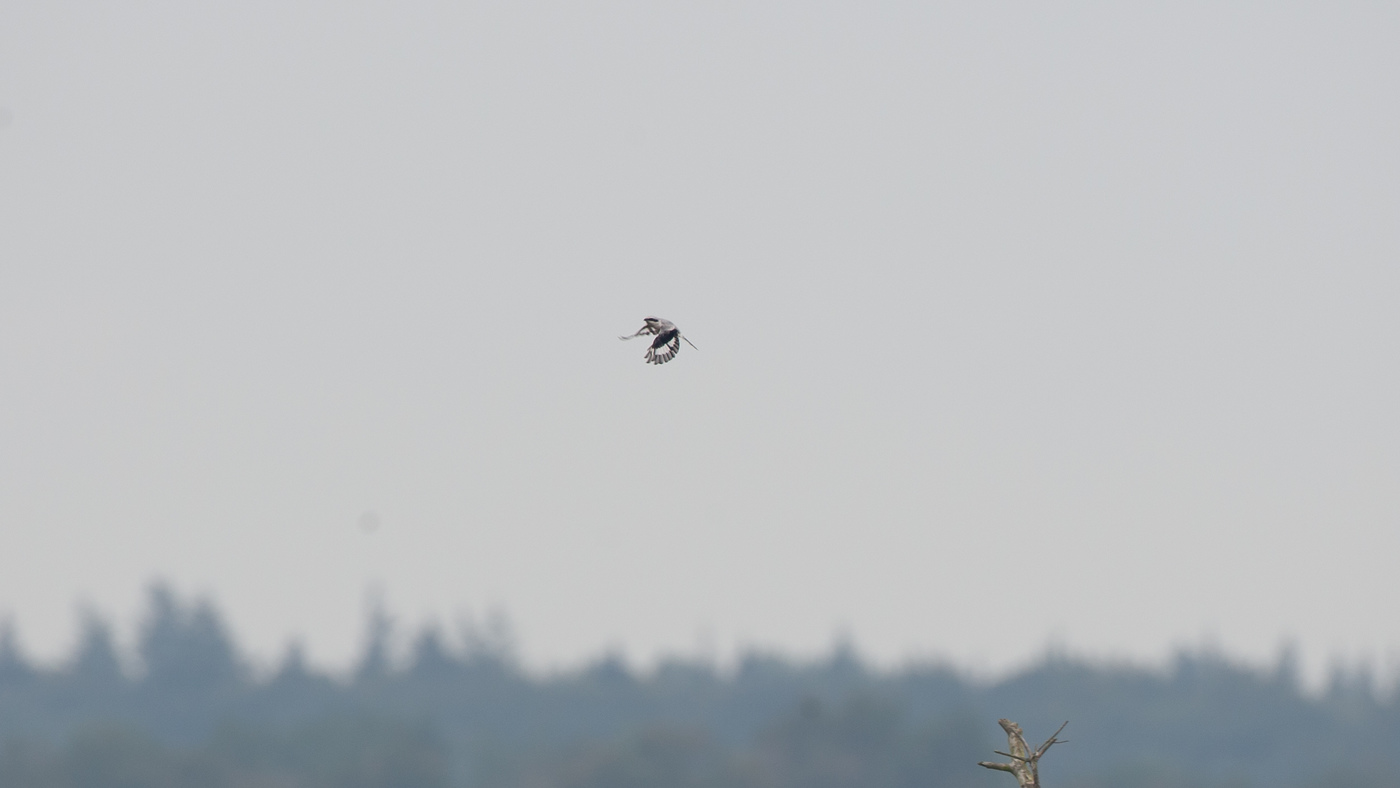 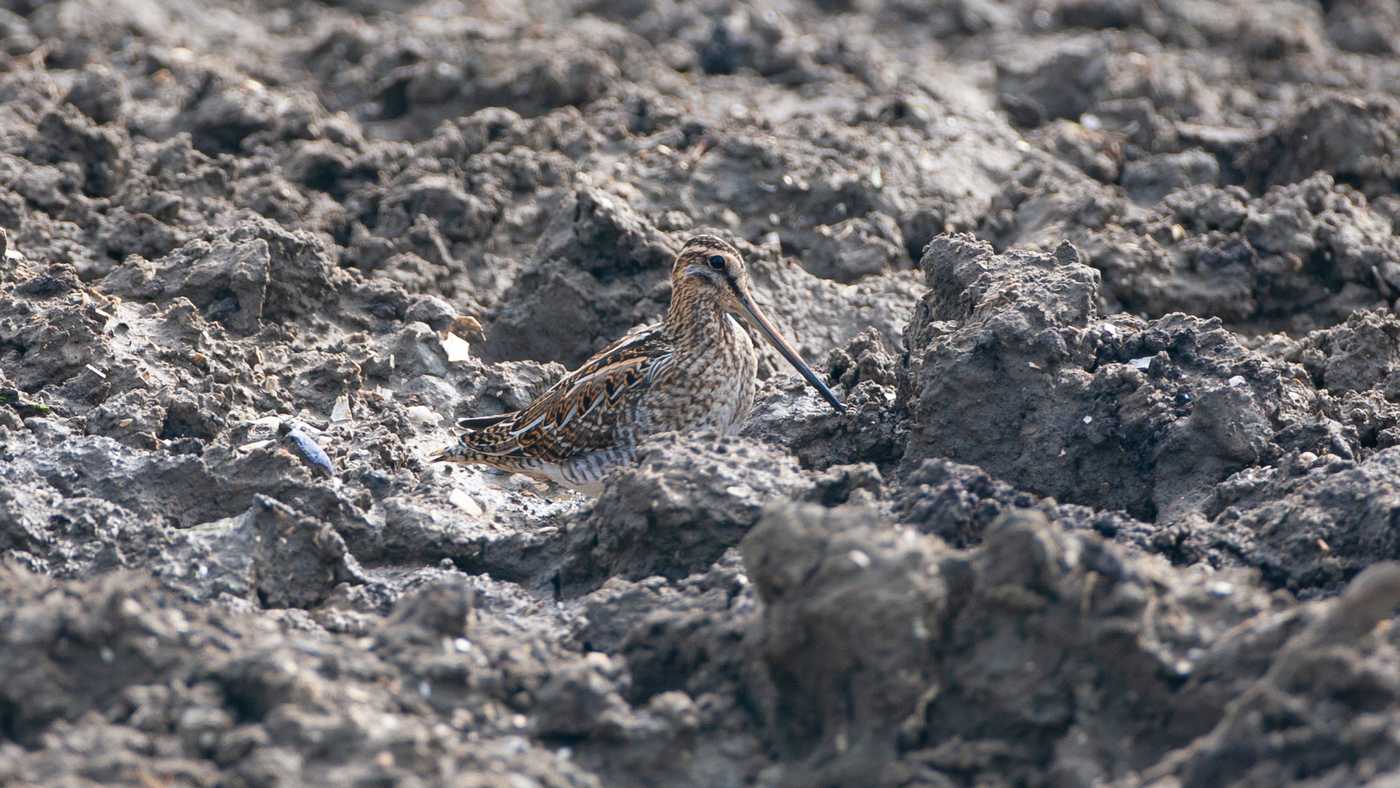 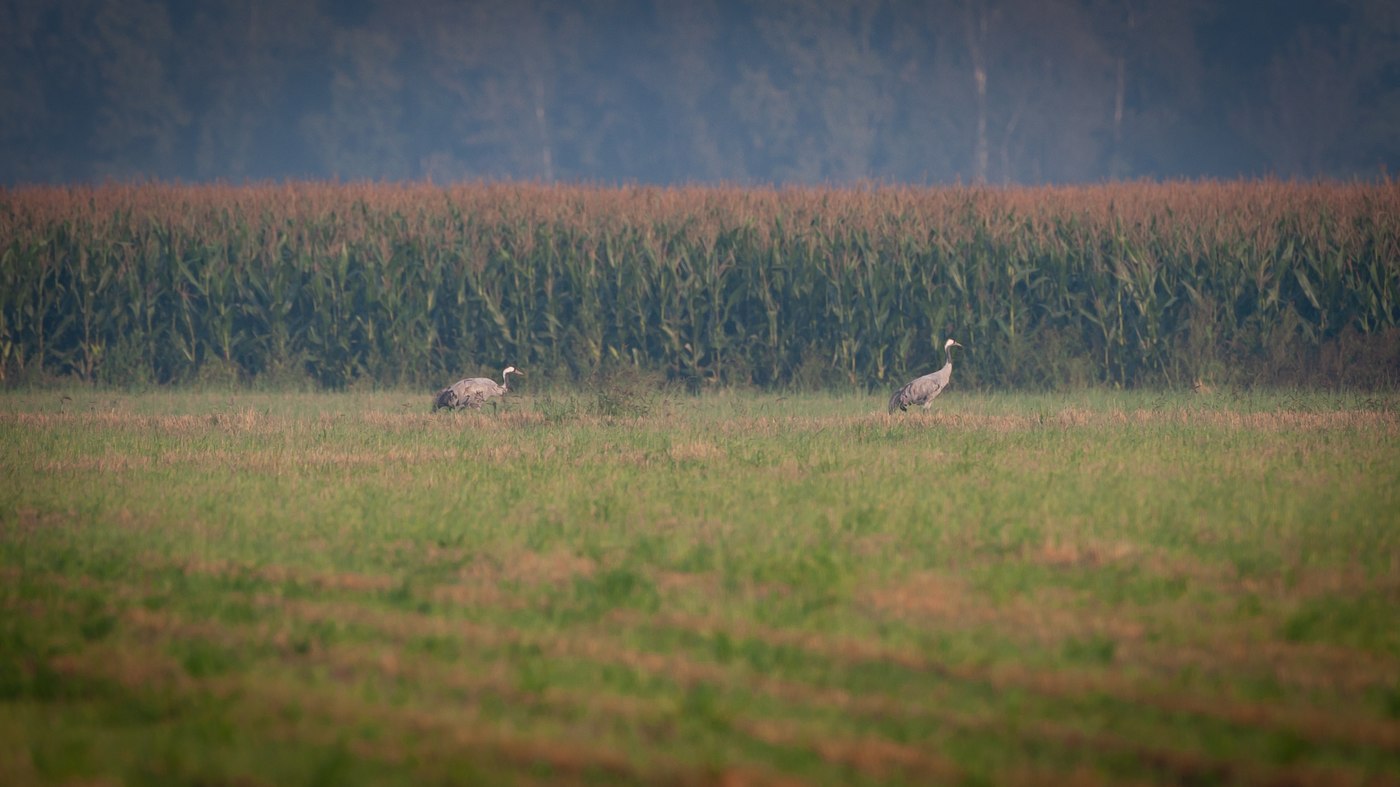 Not too early at 6.45 am I picked up Thijs Fijen in Wageningen and then drove on to the familiar pump just past Zwolle where we picked up Alwin. At half past eight we drove into Fochteloërveen and immediately discovered two Common Cranes in a field. This was a good start partly because I still needed the Crane for the month list. We drove on and a report came in that the Great Grey Shrike was seen. Not long after we parked the car and went further on foot. Everywhere we saw a lot of Meadow Pipits, a good sign that the migration is starting. In the distance we saw Enno Ebels and Martin Olthoff, they had seen the bird but it had vanished from the scene.

We decided to wait until the bird showed itself again. After about one hour the Shrike suddenly sat back in the bush where he was earlier seen this morning. He was clearly lighter than our Shrike and when the bird sat low it seemed we were watching a Black-eared Wheatear. Luckily I was able to take some evidence pictures which we can use for further determination. We now focus our attention on the Short-toed Snake Eagles who are reported for a while. It started to rain so our chances seemed lost, however we saw 5 Honey Buzzards. The birds have probably stayed overnight and are now heading further south. The Short-toed Snake Eagles were not found. 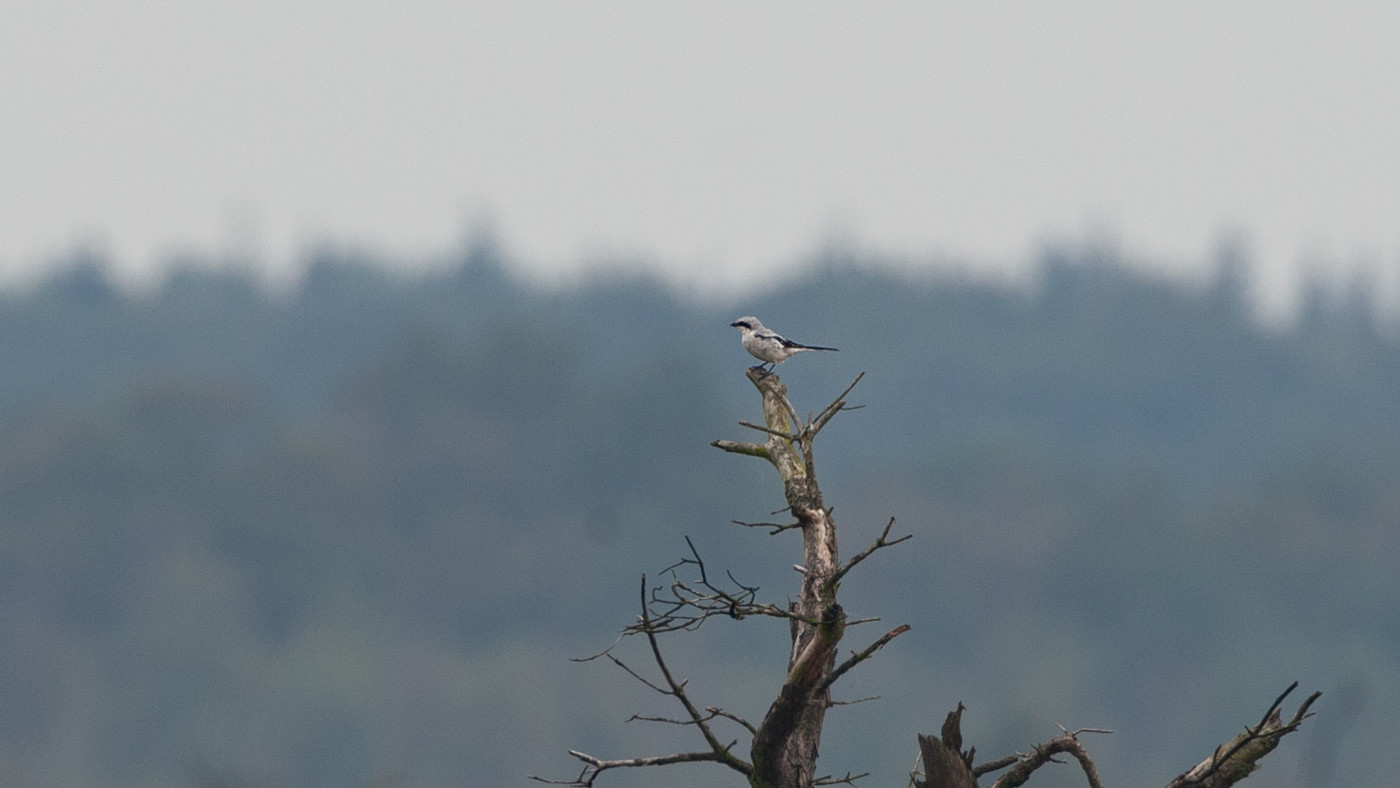 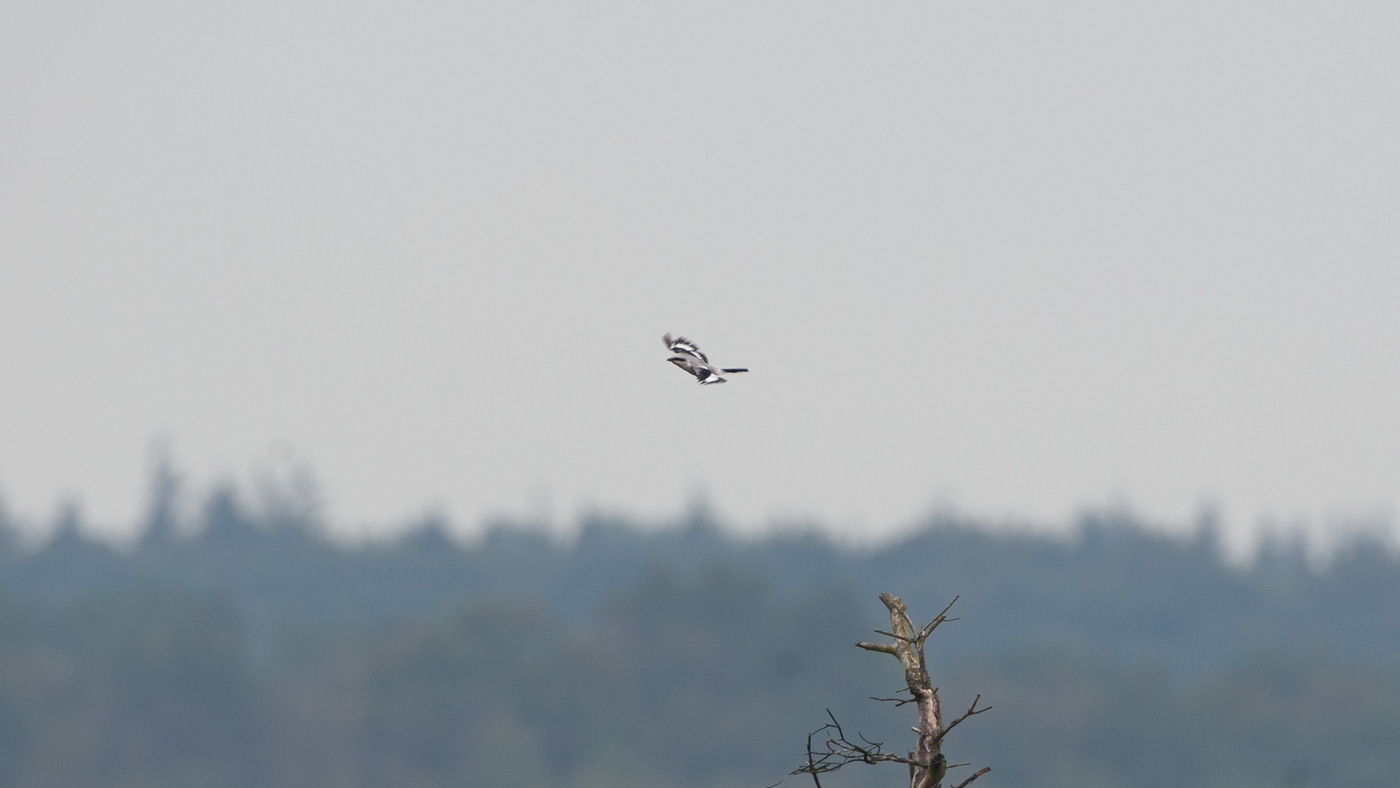 We drove to the Lauwersmeer where we start in the North Ezumakeeg. Ducks from different species swarmed here. There were already a remarkable number of Northern Pintails. There were a lot of Black Terns and we searched in vain for the White-winged Tern who is reported here a while. A Caspian Tern flies over. It starts to rain so we drive to the hut in the South Ezumakeeg. Here we see a Garganey which is new for my month list. Again a lot of Ducks. Apart for some Little Stints and Ruffs there is not much to see. It's getting dry and we drive back to the northern part of the Keeg for another attempt for the White-winged Tern. Again we don’t find the bird. In the Bant Polder a Glossy Ibis is reported and we find the bird quickly, we also find a beautiful adult Peregrine Falcon here. In the marina we find a Black Redstart and in the See harbour 5 more. We drink a cup of coffee in Schierzicht before we drive to the Vlinderbalg. 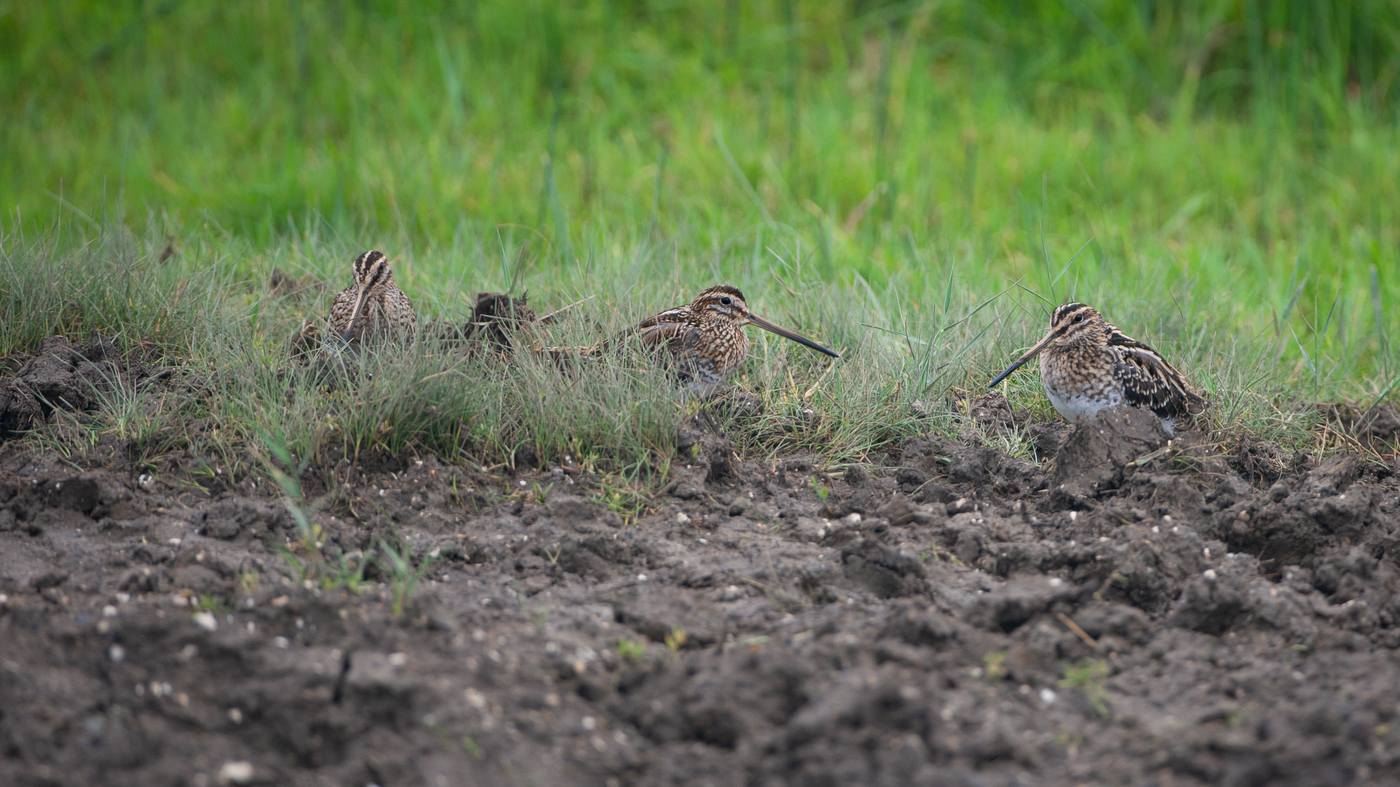 At around 3 o’clock we arrive at the Vlinderbalg and see 6 Ruddy Shelducks. The hut at the Jaap Deensgat is the next destination. Here we find at least another 50 more Ruddy Shelducks. A Snow Goose is one among the many Greylag Geese. Nice was a Grey-headed Wagtail and in front of the hut there were several of Common Snipes at short distance and offered good photo opportunities. Mark de Vries called us and reported 3 Broad-billed Sandpipers in the Breebaard Polder. For me this is a new one for the year list and immediately we drive that way. After a ride of 70 km we arrive in the hut and look out over the lake filled with Red-spotted Shanks and Dunlins. The Dunlins are very restless and often fly up what gives a magnificent spectacle. Unfortunately, after 3 hours of searching, the Broad-billed Sandpipers are not found.

We drive back home and on the way have a dinner. It has been a nice day with as many as 103 species. Not bad for this time of year.