For Wednesday, May 5 was a trip Lauwersmeer on the program. May is always a good month for this area. Before we would drive to the north, we tried to score a Stone Curlew which was discovered yesterday near Gennep. Alwin had to drive south first. For me this is almost a home game. Early in the morning around 6.15 am I was in the area waiting for Alwin. Nightingales, Whitethroats, Lesser Whitethroats and many other birds entertained me with their vocals so the waiting was not a punishment. 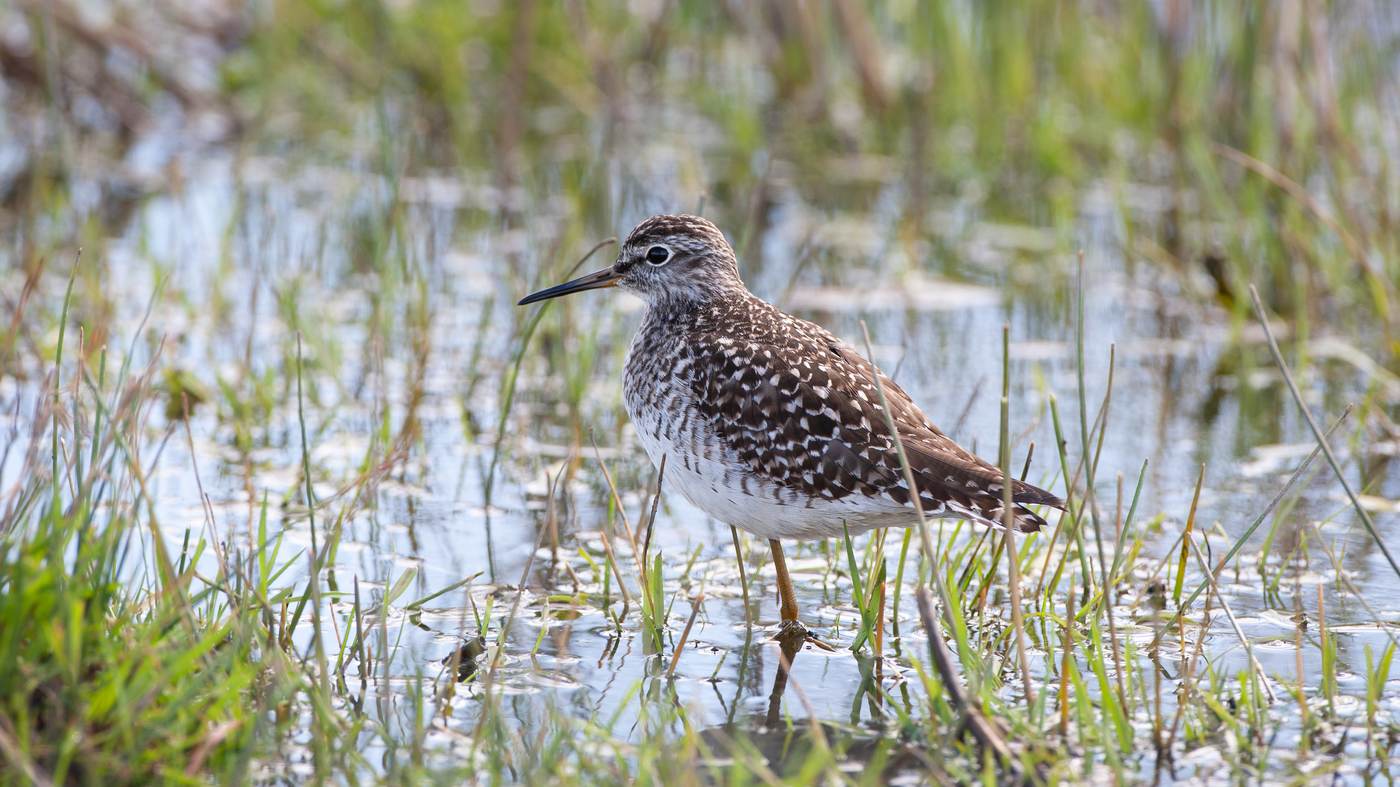 Alwin arrived at 6.30 am and we put together in the search. Other birders were searching also for the Stone Curlew. After half hour with no result we decided to do the Kraaijenbergse lake for the Whiskered Terns that were reported yesterday. No Stone Curlew but 2 new year species: a Redstart and a Icterine Warbler. The drive to the Kraaijenbergse lake was not long but here we had also no luck. Only a few Common Terns, but no trace of Whiskered Terns. We did not search long and were quickly on the A73 heading north. Just past Zwolle we stopped and left one car. After a journey of about two hours we arrived at the Lauwersmeer. We wanted to start at the YMCA building, but this road was closed. Then the Keeg first, here was a Green-winged Teal reported yesterday. We started at the hut, a few Wood Sandpipers and a White Tailed Eagle but that was it. We drove towards the Keeg at the noth side. A large cloud Barnacle Geese came flying towards the Keeg. Alwin discovered in the cloud a Ross Goose. A little further away a Wood Sandpiper was very close so we took some pictures. The north side was not much better and there were poor light conditions, only Common Teals but no Green-winged Teal. Next stop was at the outer dike areas of Peassens. Again it was very quiet, we continued our way towards Port Lauwersoog. There were hundreds of Turnstones and some Northern Wheatears. The present Common Terns were checked for an Artic Tern but with no result. 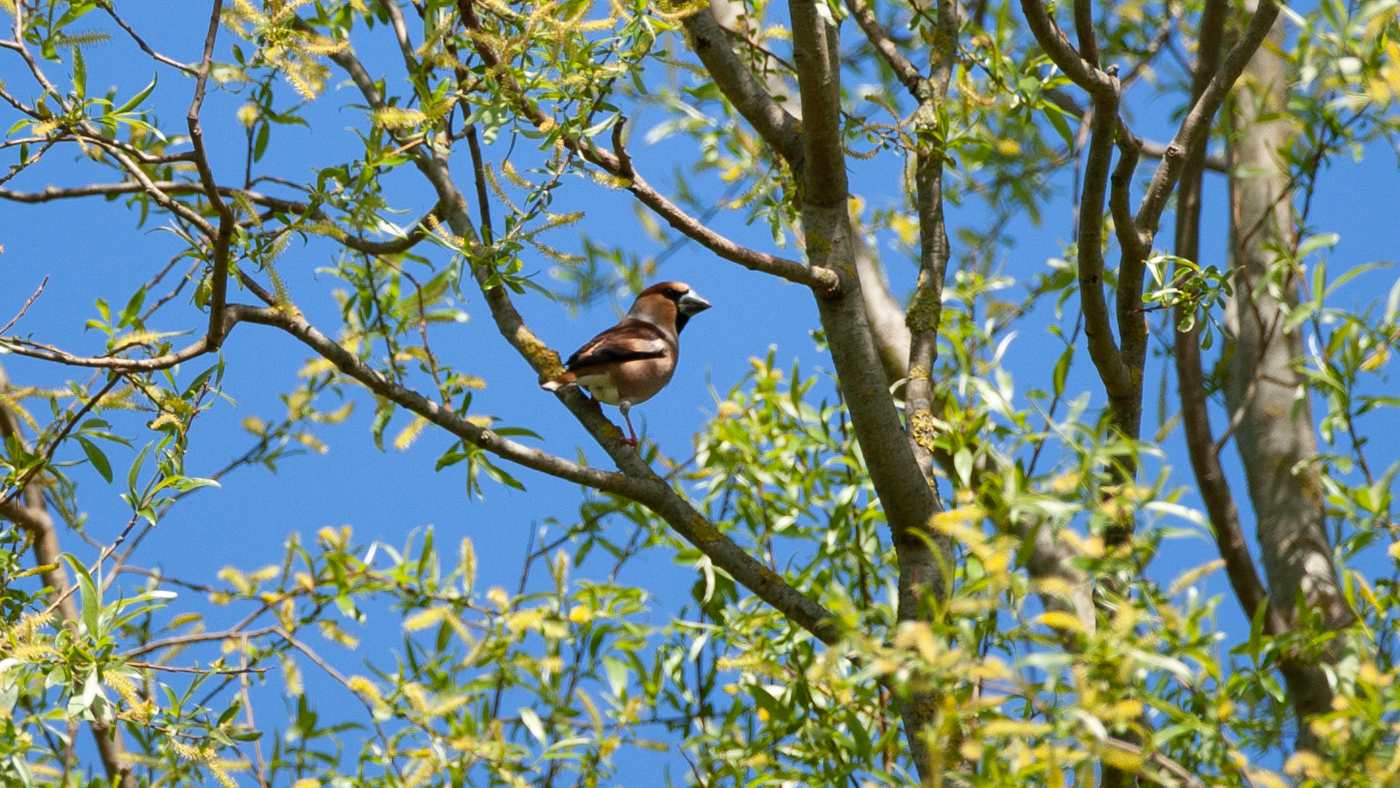 We set out to "Achter de Zwarten' for the Golden Oriole, and other songbirds. The location is also very good for waders. During the walk to the viewing hump we heard a Cuckoo and several Garden Warblers. From the look we discovered a Red-breasted Goose, that we had missed in the Bant Polder. Furthermore, it again was very quiet and there were remarkably few wading birds. On the way back to the car we heard a Golden Oriole calling and for both this is a new year species. We set of for the birdwatching hut at the Jaap Deensgat. After a short walk we sat in the hut. But here the same story, few wading birds and no Terns. A few Spotted Redshanks were good for the day list.We stayed not long and were soon on our way to the camping site “De Pomp”. We could not come here this morning because the road was closed but we approached it from the north. Again, the road was closed, but local traffic was permitted. We felt we belonged to local traffic and we drove past the roadblock. At the YMCA building, there appeared to have changed a lot. A piece of vegetation had been cleared and there was now a building site. Shame that this piece was gone and we did not see much. We drove to the Zomerhuisbos here and took a walk. A singing Pied Flycatcher was heard and this was a new year species for both. A Hawfinch was noted by his call and the bird could be seen and there were a couple of photos taken. A walk at “Vogelroute de Pomp” was the next destination. A Bluethroat kept us busy for some time. The bird dropped nicely in the photo set. Further a Grasshopper Warbler and many Linnets. Last stop for today is another visit to the Keeg. The Sun is now in the back so the view is better. We start again at the hut. There was not much more than in the morning. The Ross Goose was sitting on the fields behind the Keeg. On the north side there were much more Common Teals but the Green-winged Teal we could not found, also there were more Garganey. A Temminck's Stintwas discovered, another new year species for both. It was time to go home. In the car the day list was made up. In total a 106 species can be listed today, certainly not a wrong number!