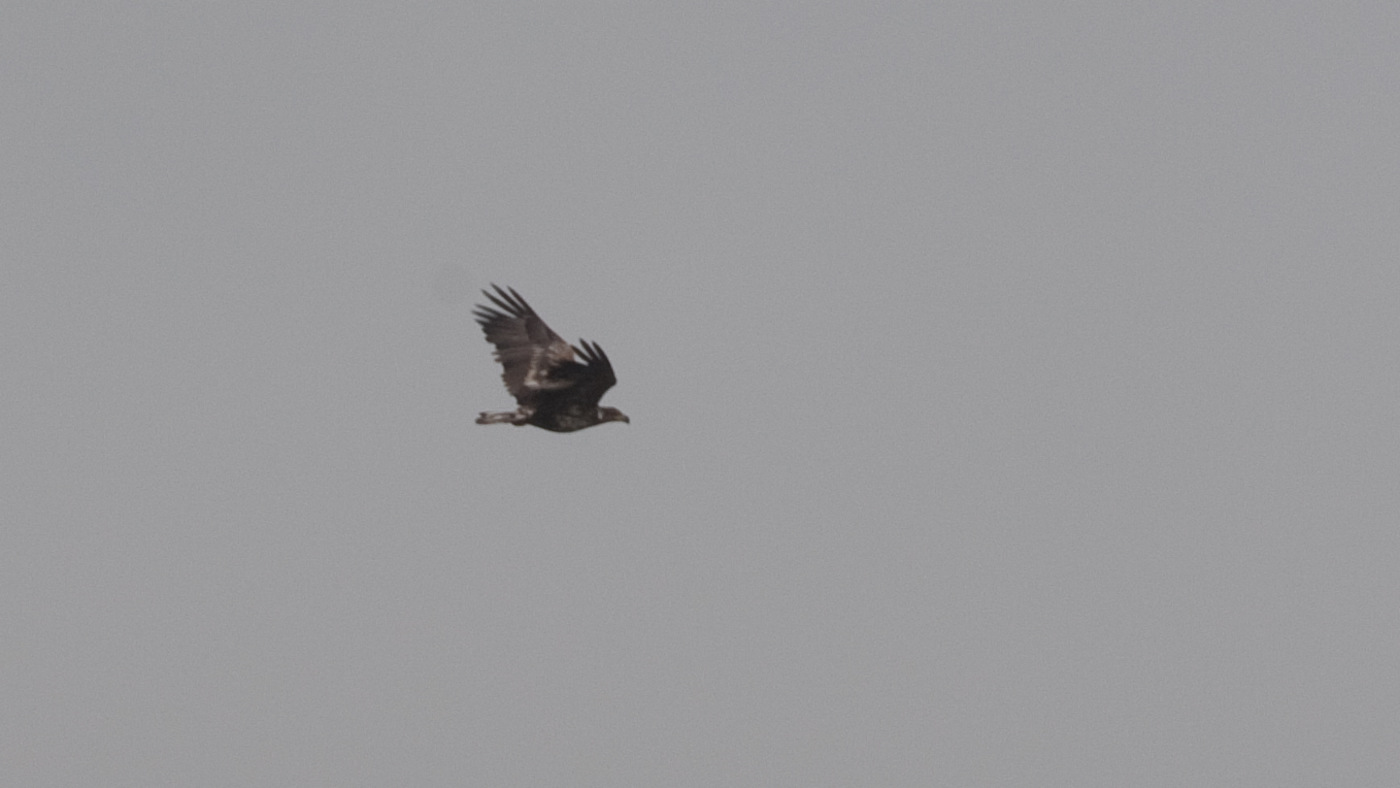 After some doubt, I still decided to join the Top of Holland birding day. The day took place on May 8 and lasted from midnight to 19:00. The aim is to score as many species as possible and there are prizes for the discovery of the best species. For the best specie you will receive a Leica Ultravid 10x42 binoculars, so not bad. Species count only in the provinces of Drenthe, Groningen and Friesland.

Alwin, Thijs and I had registered ourselves under the name: The "twitch-and-go" team. It was waking up early because we would meet at 6.00 hours at a gas station just past Zwolle. After a strong cup of coffee we drove here at exactly 6.00 hours away. At 6.12 we drove into Drenthe where the listing was allowed to start. Along the A32, a Carrion Crow was the first bird quickly followed by a Jackdaw and a Magpie. Diependal was the first goal and we took the exit for the N371. Along this way we then recorded the following species: Mute Swan, Mallard, Buzzard, Blackbird, Starling, Wood Pigeon, Coot, Eurasian Jay, White Wagtail, Oystercatcher, Blue Tit and Collared Dove. Big mis was the Stork that we usually see along this route. We arrived at Diependal at 6.50 and it was drizzling a bit. We drove with open windows towards the car park and scored a Chiffchaff, a Tree Sparrow and Yellowhammer. Diependal was not a bad choice and the following species were recorded: Wren, Finch, Greenfinch, House Sparrow, Great Tit, Robin, Goldfinch, Blackcap, Whitethroat, Song Thrush, Willow Warbler, Garden Warbler, Cuckoo, Stock Pigeon, Black-headed Gull, Lesser Black-backed Gull, Red-necked Grebe, Bittern, Pochard, Shoveler, Gadwall, Moorhen, Reed Bunting, Sedge Warbler, Marsh Harrier, Little Grebe, Tufted Duck, Great Crested Grebe, Yellow Wagtail, Grey Goose, Rook, Grey Heron, Skylark, Dunnock, Wheatear, Linnet and Lapwing. The species list was expanded to 56 species.

We drove quickly to Appelscha for a walk on the Ackingerzand. During the ride it started to rain and it looked dark and gray, no best prospects. At 7.30 we arrived at the car park at the Ackingerzand. It was drizzling a bit but certainly not a hard rain. A Redstart (57) was recorded immediately. A Green Woodpecker (58) flew in front of us. We set of to the lake for the Black-necked Grebe. Along the way we scored a Short-toed Tree Creeper (59), Stonechat (60) Wood Lark (61) and a Great Spotted Woodpecker (62). At the lake we saw the expected Black-necked Grebe (63). We walked quickly back to the car through the forest. A female Ring Ouzel (64) flew up and went down in a birch, this was a welcome kind. Along the forest we heard a Pied Flycatcher (65) sing. We also had a Long-tailed Tit (66), Lesser Whitethroat (67), Tree Pipit (68), Crested Tit (69) and a Mistle Thrush (70). Next stop was Fochteloërveen, on the road we occasionally stopped to listen to singing birds. That way we picked up a Coal Tit (71) and a Marsh Tit (72). At 8.39 o’clock we arrived in the area and one of the first birds we saw was a White-tailed Eagle (73). This we had certainly not expected. From the car we saw the bird hunting behind some Geese. There were a few quick photos. A short walk in front of the bird watching hut that is suited beside the Fochteloërveenweg produced a Whinchat (74). We set of to the lookout tower. During the walk to the tower, we noted a Goldcrest (75) and a fly by Hawfinch (76). After a short climb we looked from the tower into area. Alwin discovered a Common Crane (77) a good specie for the day list. Furthermore, we saw a Swift (78), Barn Swallow (79) and a House Martin (80). On the way back to the car we could catch a glimpse of a Tawny Owl (81) which sat in a nest box. We drove back to the Fochteloërveenweg again driving through the area. We recorded here the following species: Little Ringed Plover (82), Greenshank (83), Common Sandpiper (84), Whimbrel (85), Curlew (86), Herring Gull (87), Grasshopper Warbler (88), Meadow Pipit (89), Teal (90), Turtle Dove (91) and a Nuthatch (92). In Smilde we just in time saw a Sparrowhawk(93) sitting on a shed, the only one of the day. We had a few pictures.

We were now heading to the Lauwersmeer. On the way we saw an attractive forest where one could expect a Wood Warbler. We parked the car at 10.56 o’clock and went into what proved to be the "Blue Forest". Almost immediately, a Wood Warbler (94) was heard and seen, this was nice going. We again set sail for the Lauwersmeer but had to divert our route because of a Truckrun for which the road was closed. This was a setback and we had a long way because of detours. During the rest of the trip we noted a Common Gull (95) a Cormorant (96) and a Kestrel (97). Finally at 12.15 we arrived at the Pilot Farm in the Lauwersmeer. Here we recorded a Shelduck (98) and a Bluethroat (99). We moved on to the Zomerhuisbos for a walk to the lookout hump. Hundredth kind of day was a Great Black-backed Gull (100). Furthermore, we saw a Spotted Flycatcher (101) and a group of Ringed Plover (102) flew over us. We got a message that there were 4 Dotterels discovered not far from the Westpolder Jaap Deensgat. It was not far so we drove straight to the Westpolder. Here we arrived at 12.57 o’clock. We had the Dotterels (103) in sight almost immediately, and we took some pictures. We went backwards to the bird watching hut at the Jaap Deensgat. Here we wrote down the following species: Little Gull (104), Ruff (105), Redshank (106), Spotted Redshank (107), Golden Plover (108), Little Stint (109), Wood Sandpiper (110), Sanderling (111), Bar-tailed Godwit (112), Common Snipe (113), Spoonbill (114), Peregrine (115), Common Tern (116), Wigeon (117), Pintail (118), Garganey (119), Avocet (120) and Barnacle Goose (121) . 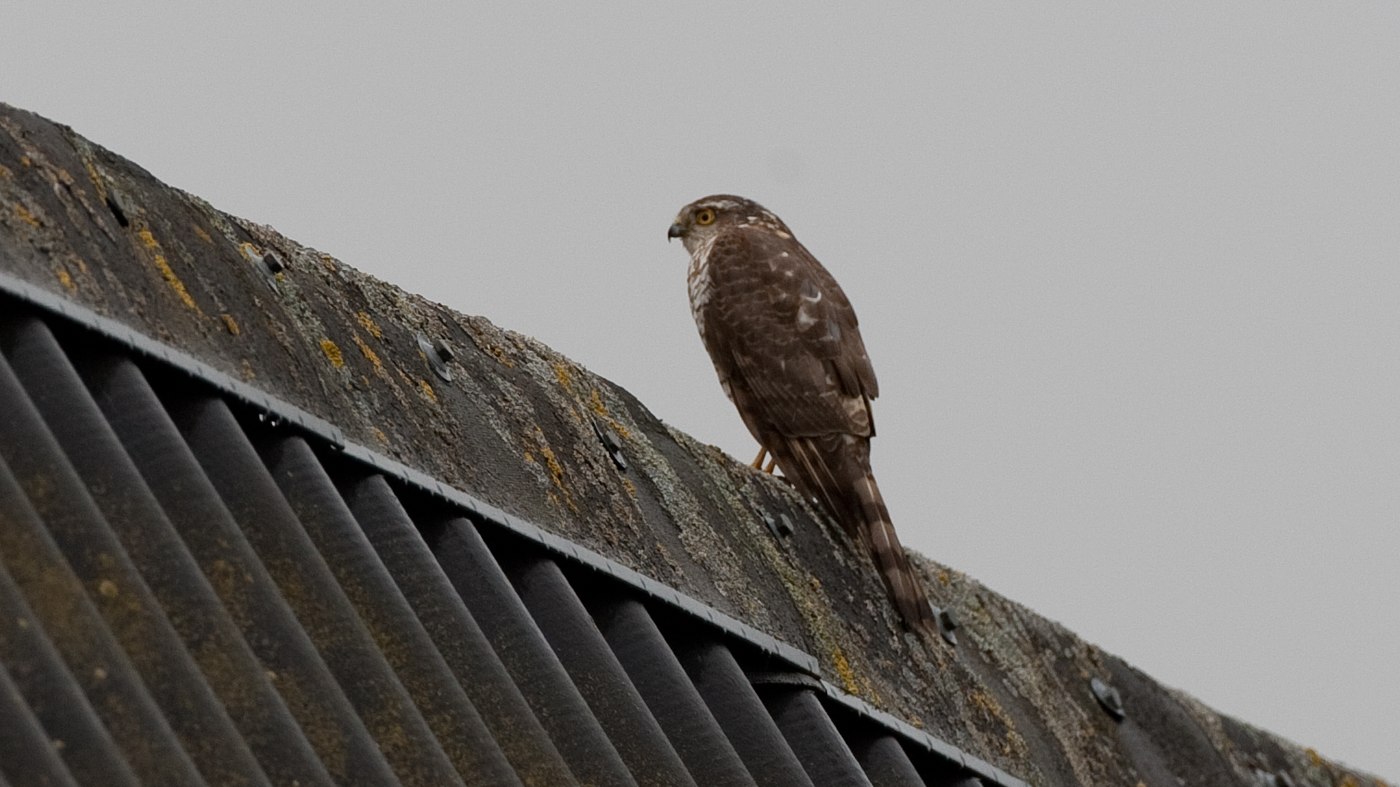 On the walk back to the car a Buff-breasted Sandpiper was reported at the Schildmeer Tetjehorn. After a brief discussion the team decided to drive 40 km to the Buff-breasted Sandpiper. At 14.35 hours we arrived at the area, the bird was not seen at that time. After a short search the bird was found and we could list the Buff-breasted Sandpiper (122). Also we scored a Hobby (123), Saves Warbler (124) and a Temminck's Stint (125). We drove quickly back to the Lauwersmeer to the Vlinderbalg. Here we saw the Goldeneye (126), Bearded Tit (127) and the Sand Martin (128). Next stop was a hike to the lookout at hump "Achter de Zwarten." The Golden Oriole was expected along the walk to the lookout bulge but is was not heard. Once at the viewing hump we heard a Golden Oriole (129) in the distance. A passing Grey Plover (130) and a Turnstone (131) could also be credited. We drove over to the coast road in the hope of a Montagu’s Harrier. This was not found but one look over the mudflats produced Brent Goose (132), Dunlin (133), Black-tailed Godwit (134) and Knot (135). At 17.27 we were at the marina Lauwersoog and a couple Black Redstarts (136) were recorded. In the Bant Polder a Red-breasted Goose was reported, which was the next destination. At 17.37 hours we searched the Goose without success. A flying Green Sandpiper (137) was very welcome. Rapidly towards the Keeg for Green-winged Teal and Red-necked Phalarope that were reported earlier that day. Unfortunately we could not find it. Wietze Jansen told us that, just after we drove away in the Bant Polder, the Red-breasted Goose was on the other side of the road. Without doubt the ride was immediately returned to the Bant Polder. After a short drive we found the Red-breasted Goose (138) on the spot that Wietze indicated. Not long after we were back in the Keeg where a Ross' Goose (139) came flying in. Unfortunately, we still not could find the Green-winged Teal and Red-necked Phalarope.