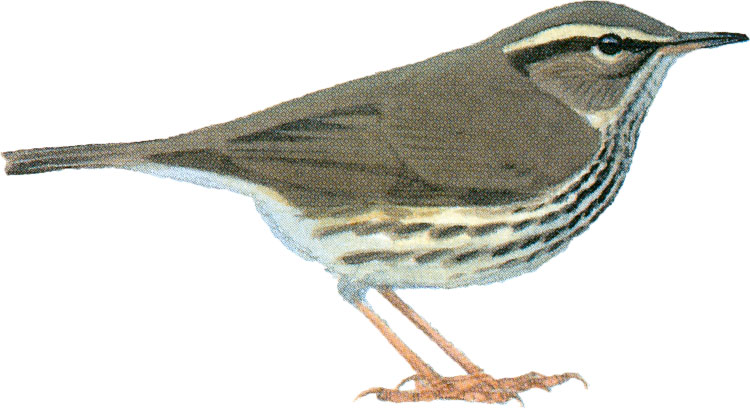 Because of the long ride and a ferry crossing going today was excluded. However, it was decided to leave early the next day so the first boat at 8.30 could be achieved. This with the risk that the bird was gone now. Jan Verhoeven gave immediately that he wanted to go. That same evening I booked two tickets on the Internet for the ferry this was a good action appeared the next morning. We were not the only birders who were making the crossing.

The Northern Waterthrush is a North American species that winter in South America and the West Indies. In Europe the bird is rarely reported and in most cases in the British Isles. In the Netherlands, the bird has never been observed.

Early morning I picked up Jan and we drove on the A50 towards Harlingen where the ferry leaves off. It is a journey of about 2 hours and 1.5 hour later a mail came through with the news that the Northern Waterthrush was seen again. It felt good because the bird certainly not disappeared. Now the bird was to be seen by us which given the information was still a challenge. Right on time we arrived in port and after fifteen minutes we were aboard the ferry that takes a half hour to go across. Approximately 150 bird-watchers were also aboard to get the bird to their list. Along the way a Leach Storm-petrel was discovered what for most is a new year kind. The crossing went without further details and on arrival many birders ran towards a taxi or rental stores for a bike. Jan and I took it easy and after about 10 minutes we were on the bike for the journey of about half an hour.

There was a strong headwind and it drizzled a bit. I noticed that it was a good year ago that I had sat on the bike and soon I had a back wet with sweat. Along the way we were encouraged by other birders who had seen the bird early in the morning. After a tiring journey (for me, not for Jan) we arrived at the Old Duck Cage. There were about 200 people in a small group waiting at the place where the bird was seen this morning. After one hour or so there were no results so people went to search in other places. We stayed where we were and wanted to maintain the old place theory. Not much later came a message that the bird was seen on the other side of the lake. Almost everyone went to the other side and we were left with a group of about 20 men. We were not convinced of the truth of the report. Not much later, somebody warned us that the bird was actually seen by him not more than 5 minutes ago.

We went immediately to the other side and joined us in the large group. After 45 minutes the bird was seen again. We stood in a place where it was impossible to see bird. This happened again and it became clear that I from this place I certainly not would see the bird. From the group came the question of a known birder whether I had seen the bird. I denied and she beckoned to take her place. From this spot you could see the bird when he returned in the same spot. After a half hour wait, which I occasionally began to doubt whether I would see the bird at all, the Northern Waterthrush suddenly flew in. The bird gave a good show and was certainly 5 minutes to see. Jan Verhoeven was behind me and after following instructions, he had the bird in view. Relieved and satisfied we walked towards our rental bikes. It had been raining but that did not spoil. On the way back we wanted to try a Woodchat Shrike that is reported since a few days. The rain began to increase in intensity so that the Shrike was nowhere longer in sight. This too we took for granted and we cycled to the village where we wanted to have a drink. It was an Irish coffee and then some few beers.

At 18.30 hours we boat back to the mainland and two hours later we were in the car direction Uden.