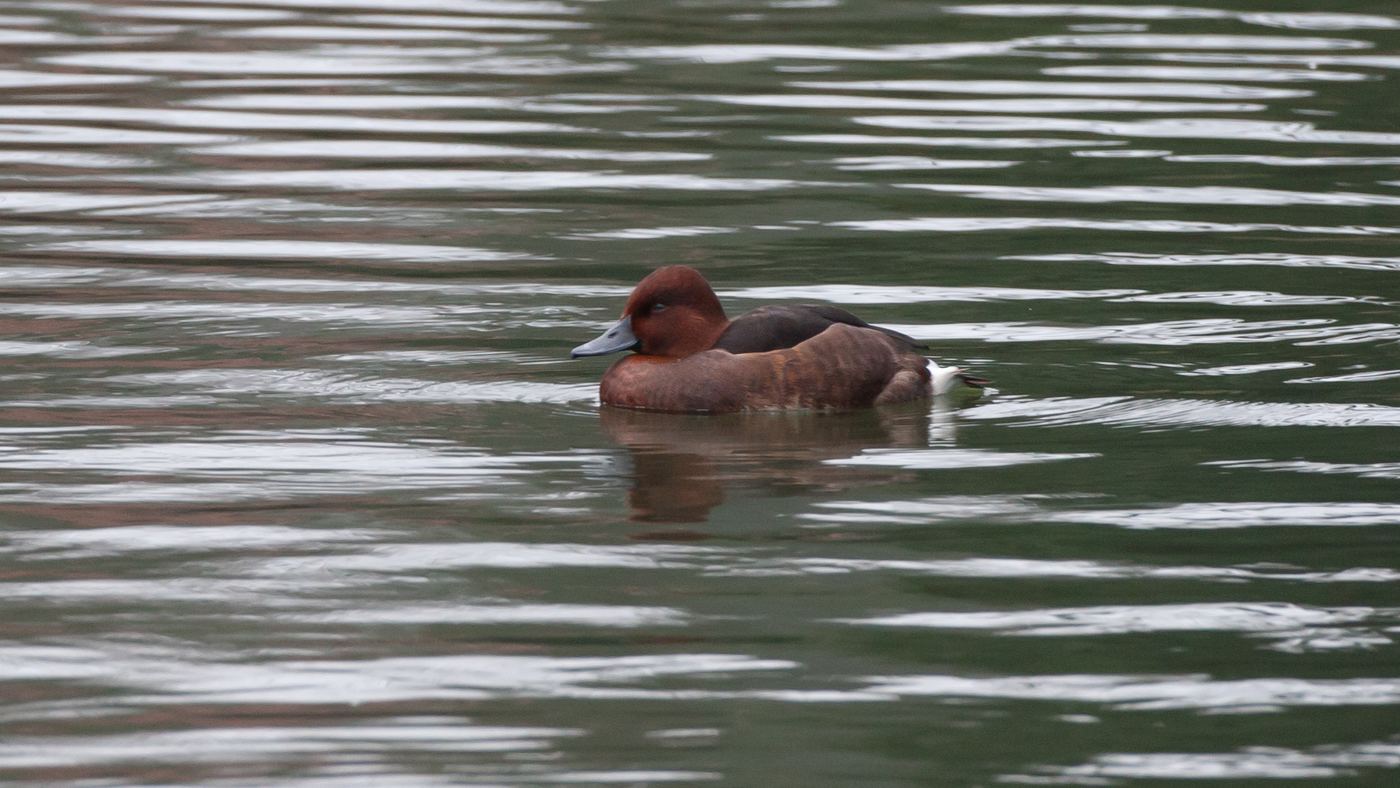 It is quiet in Birding Holland and the best option for today appeared in a Ferruginous Duck at Tegelen and then a search for a Short-eared Owl in Keent.

Tegelen is not far away so we could have a longer lie. At 10 o’clock I picked up Jan Verhoeven and Koen Rovers. An hour later we were in Tegelen at a large pond near a castle and the Ferruginous Duck was quickly found. It seemed that pictures from a short distance could be made but the duck is was shy and swam away. Later we discovered that it was a Ferruginous Duck and it was infect an escaped bird. After some distance shots we drove back to Brabant where we first visited the Kraaijenbergse Lakes and then drove to the Keent.

After coffee and a hearty lunch for Jan, we arrived at the Kraaijenbergse Lakes. There were large groups of White-fronted Geese in the wet meadows. First stop was the bird watching hut at lake nr 5. There were some Bewick’s- and Whooper Swans. Furthermore, many Wigeon, some Pintails and Goldeneyes, but otherwise it was quiet. We drove to the village of Linden. In the distance we saw a Buzzard hovering that I immediately determined as a Rough-legged Buzzard. The bird perched in a tree, and we drove closer. Threw the telescope clearly all the characteristics of a Rough-legged Buzzard were visible. It was a beautiful light bird and during flight the tail was clearly visible. It turned out to be a juvenile bird which looked very much like the Rough-legged Buzzard who has spent time in the Keent.

On the way to the Rough-legged Buzzard, we passed a lake full of Ducks. We returned to this place and found a female Greater Scaup. A good species for inland but at the Kraaijenbergse Lakes seen more often. We made the round Kraaijenbergse Lakes and saw not much more spectacular. We continued towards the Keent for the Short-eared Owl. The first bird we saw was a female Hen Harrier hunting. There were many Buzzards but of the Short-eared Owl was not a trace. We searched for one hour and definitely decided to drive to the tower in Haren. This is a nice ride along the floodplains of the River Meuse. Everywhere were large groups of White-fronted Geese and Tundra Bean Geese. Between the Tundra, we discovered a Taiga Bean Goose. In the puddles at the tower the water was very high and here were not many birds. In the puddles on the side of Haren we found a Goosander and 4 Smew. The Peregrine Falcon which is breeding here for several years now was not present.

There was still plenty time left so we drove to the Maashorst with the intention to find a Jack Snipe. We parked the car in the Karlingerweg where we saw a Little Owl. The Jack Snipe are usually seen at the Grensweg so that was the destination. The water in the puddle was very high and the probability of a Jack Snipe seemed lost. In the distance, a Black Woodpecker was calling and calling Crossbills did some good. Both are new species for the year. The Jack Snipe was indeed not present.